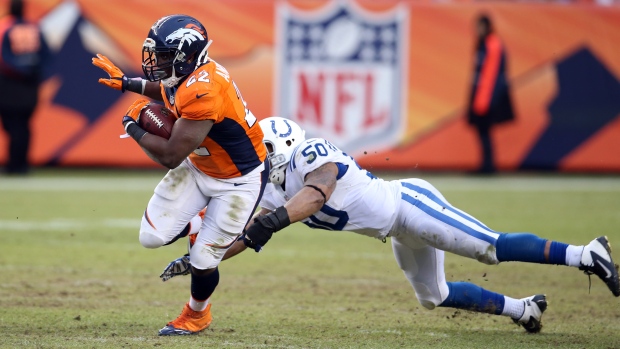 Unlike most fantasy football seasons, the upcoming 2015 campaign does not have a consensus No. 1 overall pick. Strong cases can be made for Le'Veon Bell (who would be the top pick if not for his suspension), Eddie Lacy, Adrian Peterson, Jamaal Charles, and Marshawn Lynch, but each of those players has some weakness in his game that precludes him from being the top overall selection.

One under-the-radar contender in this discussion is Denver Broncos running back C.J. Anderson. He doesn't have the storied history of the ball carriers listed above, but a closer look at the game tapes and metrics indicates Anderson has a powerful case for the No. 1 overall pick in fantasy football.

He finished the 2014 season on a tear

Anderson wasn't used often from Weeks 1-9 (17 carries for 82 yards and no touchdowns) but he hit the ground running once he started to get the ball more often beginning in Week 10.

From that point through the end of the season, Anderson posted 158 fantasy points, a total that was higher than Bell (149), Lacy (137), Lynch (134), Murray (120) or Charles (109). To be fair, Anderson posted his mark in eight games, whereas Bell and Murray had only seven contests. Even with that caveat, it shows Anderson more than kept up with the top fantasy running backs when given the opportunity last year.

Anderson was just as valuable in PPR leagues during the Week 10-17 time span, as his 188 points ranked tops among running backs in that league type. This was not a matter of his rushing ability compensating for a lack of pass game production, as Anderson ranked third among running backs in PPR points on passing plays over the second half of the season (68).

A key factor in Anderson producing big fantasy numbers was his superb showing in my good blocking yards per attempt (GBYPA) metric. This statistic gauges a ball carrier's production on plays with good run blocking, which is roughly defined as when the offense does not allow the defense to disrupt a rush attempt.

Anderson's 9.9 GBYPA was tied for second best and was on the precipice of the double-digit GBYPA bar that signifies elite status in this metric.

A head coach with one of the best run-blocking systems

The only running back to post a higher GBYPA total than Anderson last season was Justin Forsett (11.4). This is a serendipitous occurrence, as Forsett's offensive coordinator, Gary Kubiak, is now Anderson's head coach.

This combination could lead to a higher GBYPA mark for Anderson, but just as importantly it could also lead to an increase in Denver's good blocking rate (GBR). The Broncos 34.1 percent mark in this category ranked 25th in the league and was 3.5 percentage points behind Baltimore's 37.6 percent GBR. A few percentage points might not seem like much of a difference, but if Anderson carries the ball 250-300 times, it could give him anywhere from 9-11 more good blocking attempts. All it would take is one home run on those carries to tally an additional 8-10 points to Anderson's already strong fantasy total.

Denver is likely to run the ball more often

There are many factors pointing in the direction of Denver rushing the ball more often this year. In his 21 seasons as an offensive coordinator or head coach, Kubiak's teams have ranked higher in the league rushing attempt rankings than they have in the passing attempt rankings on 14 occasions. He and the other members of the Broncos' brain trust have all emphasized how important getting the rushing attack to another level is for this offense. Kubiak has also discussed the idea of finding ways to regulate Manning's practice time in an effort to keep Manning at full strength throughout the season.

Every one of these items would point in the direction of the Broncos leaning on their ground game as much as they possibly can, so finding carries won't be a problem in this offense.

Won't cost much for handcuff options

One of the main issues in drafting Anderson is the chance that Montee Ball ends up regaining the starting running back role, as he has predicted he will do.

Drafting Ball as a late-round handcuff option easily offsets that risk. Given that Ball is currently ranked 46th on the ESPN Fantasy Football running back rankings and has a $2 auction value, it would not cost much to get this insurance policy for Anderson. One could even consider acquiring Ronnie Hillman as a third option in the event Anderson or Ball gets hurt.

When in doubt, it can pay to swing for the fences. Anderson is not a pick without risk, but as long as fantasy owners treat his selection as more of an investment in the Denver rushing attack, it can be a choice that yields incredibly high returns worthy of the top overall pick in a fantasy draft.