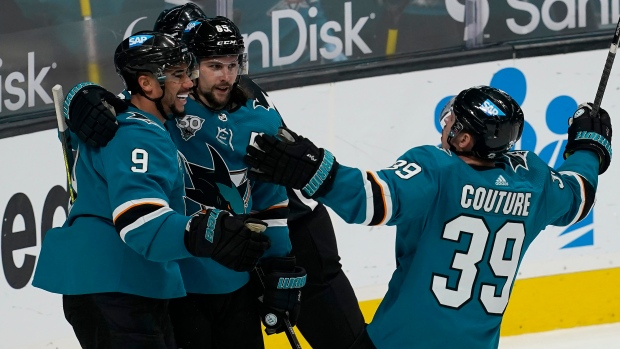 The Sharks had lost five of their first six games on their longest homestand of the season before rallying to beat the Blues by getting a tying goal in the third period from Logan Couture and the winner from Kane off a feed from Erik Karlsson on a 2-on-1 rush.

“Huge, coming from behind there,” Couture said. “I thought we competed harder in that third. The first two peirods we weren’t getting any offence. ... We were able to get a power-play goal and then a big play by Kaner.”

Marc-Edouard Vlasic also scored for San Jose, and Devan Dubnyk made 24 saves after getting starts in back-to-back games for the first time this season.

Now the Sharks get three days off before heading out on the road on a winning note.

“We didn't want that hanging over our heads,” coach Bob Boughner said. “The fashion we won was a good building block for us.”

The Blues won the first four games of their road trip before stumbling a bit at the end with overtime losses in Los Angeles and San Jose.

“It was a great trip,” coach Craig Berube said. “It really is. We got points in every game, which was outstanding. I would have liked to close these last two games out but we didn't do it.”

The Blues controlled play in the second period, earning three power plays and outshooting San Jose 16-5. But the Sharks had the only goal on Vlasic’s first of the season on a rush before St. Louis finally capitalized late on its third attempt of the period with the man advantage.

Ryan O’Reilly sent a cross-ice pass to David Perron, whose one-timer deflected off Schenn’s stick and fluttered past Dubnyk with 54 seconds left in the period to make it 2-1. It marked the fifth straight game that St. Louis scored a power-play goal.

The Sharks tied it midway through the third on the power play when a rebound of Ryan Donato’s shot hit off Couture’s skate and went into the net.

“It’s tough when you know there was another point available tonight if you held them off,” O’Reilly said. “A couple of little things hurt us and we ended up losing. All in all, we did some pretty good things.”

San Jose’s Kurtis Gabriel and St. Louis’ Kyle Clifford got into a fight on their first shift of the game. The two enforcers spent part of the pregame skate jawing at centre ice and it carried over into a spirited fight early in the game. It was the second fight in three games for Gabriel, who squared off with Vegas’ Ryan Reaves on Friday night.

The Blues and Sharks had some bad blood from their past meeting when St. Louis goalie Jordan Binnington nearly got into three tussles with Sharks players on his way off the ice after getting pulled in the second period.

Mikkola scored his first career goal on a point shot less than two minutes after the fight to give the Blues the lead on their second shot of the game. St. Louis had scored on its first shot in the previous two games.

The Sharks have been on the other side of that, having not scored in their past five first periods.