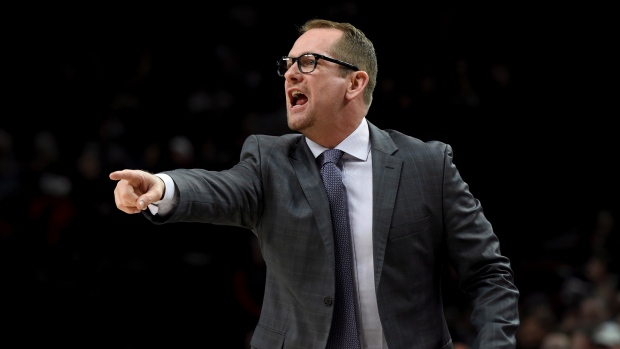 TORONTO – Over the last couple of weeks, Canada’s sports networks have teamed up to give Toronto Raptors fans an opportunity to relive last spring’s historic championship run.

It’s been a fun and necessary distraction in dark and uncertain circumstances, especially without any live games or sporting events to pass the time. And most of us have had a lot of time to pass.

That team and that run brought so many people so much joy. Even now, a year later and with far more pressing things on most of our minds, the Raptors and everything they’ve accomplished over the past 12 months can be a beacon of hope.

On Tuesday, 850,000 Canadian viewers tuned in to watch the rebroadcast of Toronto’s Game 7 win over the Philadelphia 76ers – a game that featured Kawhi Leonard’s iconic series-clinching, buzzer-beating shot.

Nick Nurse and his wife, Roberta, were among those viewers.

Like any epic tale, the story of that 2018-19 title-winning Raptors team has plenty of ups and downs, twists and turns. It has heroes and villains. It has a beginning, middle and satisfying conclusion.

However, the sequel, which was shaping up to be just as intriguing, has been left open-ended, at least for now.

Toronto was in the middle of a remarkable campaign when the NBA season – along with just about everything else around the world, in and outside of sports – was put on hold in the wake of the COVID-19 crisis.

At the time in which play was suspended on the evening of March 11 – after Utah Jazz centre Rudy Gobert tested positive for the virus – the Raptors were 46-18; second in the Eastern Conference and owners of the league’s third-best record. Despite losing Leonard over the summer and being decimated by injuries to key players throughout the season, there they were, defying the odds and exceeding all expectations.

Pascal Siakam was growing into a superstar before our eyes. Kyle Lowry was continuing to stave off Father Time and cement himself as the greatest player in franchise history, while also building a compelling case for the hall of fame. Serge Ibaka, Fred VanVleet, Norman Powell and OG Anunoby were all enjoying career seasons, and Nurse was running away as the top candidate for NBA Coach of the Year.

All the while they bonded over scarves and through hard play.

In late February, after what ended up being their final home practice before the pandemic closed their facility and forced them into self-isolation, the team’s most prominent players shared a fun moment together.

With SLAM magazine in town and featuring the Raptors in an upcoming edition, Toronto’s top-7 players posed for photos and recorded a brief and light-hearted video as a group.

Getting that many players together to participate in something like this is exceedingly rare after training camp, let alone this late in the season, but given the platform and the subject matter they all seemed genuinely excited to make it happen. And they clearly enjoyed poking fun at each other on camera.

They tried to coerce Anunoby into breaking out some of the dance moves he had shown off on TikTok a few weeks earlier. Ibaka playfully called Lowry out for trying to skip out on practices. They all gave Ibaka a hard time for his fashion choices and healthy eating. If they were likeable last year, they’re downright loveable now.

The cover of SLAM’s 227 issue, which dropped in the middle of March, read “After Ours: The reigning champs are running it back.”

We don’t know when or if their story will have an ending. The NBA is keeping its options open in the hopes of salvaging the campaign – or, at minimum, an abbreviated version of the playoffs – but the reality is there’s simply too much uncertainty in the world at this time to determine whether or not that will be feasible. Needless to say, there are more important things going on right now.

There are hundreds of good reasons to hope that life goes back to normal soon. In the grand scheme of things, seeing how the NBA season plays out should be very low on that list. Still, with that very important disclaimer out of the way, it would be nice to see if the feel-good Raptors can finish what they started.

“This is a really good team, and it's a really fun team to coach,” Nurse said. “It's a shame that we don't get to be around each other and play some games and keep this thing going a little bit, you know what I mean? Shoot, I could coach these guys 12 months a year... They're fun to be around and fun to coach. They compete and they're tough, and they figure it out. It's a true joy [to coach them] and they are missed, there's no doubt about it.”

Nurse has been using this time to take a bit of a break from basketball and focus on what’s important. He was an early proponent of the guidelines most people are now following to stop the spread of COVID-19 – things like social distancing and frequent hand washing.

Occasionally he’ll flip on the TV and watch an old game or jump on a conference call with his coaching staff to “divvy up some projects” in the interest of “staying sharp”. But, mostly, he’s been spending time with his young children, playing his beloved piano or guitar, or starting to learn Portuguese.

Like a lot of people, he’s itching to get back to work. This is the time of year he and his staff would usually be ramping up their preparation for the playoffs, which were scheduled to begin on April 18 – two weeks from Saturday.

He was also looking forward to coaching the Canadian senior men’s team in Victoria, B.C., this June, as they made a last-ditch attempt to qualify for the Tokyo Olympics the following month. With the Olympics rescheduled for next summer, and the qualifying tournament likely to follow, Nurse remains “100 per cent” committed to the cause.

However, as Nurse stressed, the Raptors, the NBA, the Olympics, professional sports in general – all of those things can wait.

“I think that if they can figure out a way to play and it’s safe and we’re not putting people at risk, then I think we’ll play, if we can,” said Nurse. “But I don’t know anybody that has any feel for any of that stuff right now. I don’t know if anybody around the world’s figured out how to resume things at all and I guess we’ve just got to wait and see. But, I mean, I think that’s everybody’s hope. We all want to get back to work. Whether it’s basketball or reporting or writing or restaurant, whatever. We all want to get back to work and I think we hope and pray that when there’s a time that it’s safe for us to do so we’ll all join the world again, hopefully, in a healthy way.”​