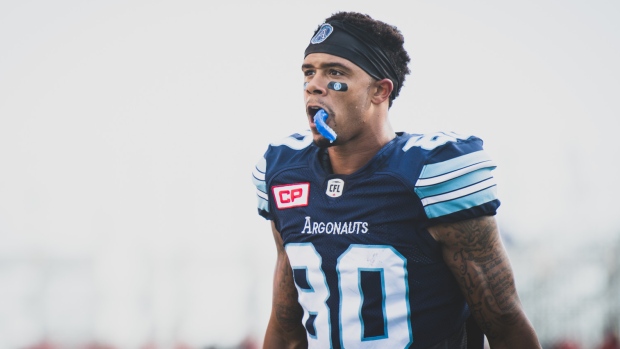 DeVier Posey , Courtesy of the CFL

Former Toronto Argonauts receiver DeVier Posey is working out for the Buffalo Bills Tuesday, according to TSN's Farhan Lalji.

Former #Argos rec DeVier Posey working out for #Bills today.
Canadian OL Brett Boyko, who was released over the weekend by #LAChargers, is awaiting an injury settlement before deciding on his future. #BCLions @CFLonTSN @cfl

Posey began the summer in Baltimore Ravens' camp, but was one of several roster cuts the club announced last weekend. Also scheduled for workouts with the Bills Tuesday are former first-rounders Breshad Perriman and Paxton Lynch, who were let go by their respective clubs over the weekend.

TSN's Dave Naylor reported that the Argos have reached out to Posey and that there was mutual interest in a return. Naylor added that the BC Lions could also be interested in Posey's services.

Posey played two seasons with the Argos but his best came last year when he caught 52 passes for 744 yards and seven touchdowns in 12 games.

He might be best remembered for his performance in last year’s Grey Cup. He caught seven passes for 175 yards and a touchdown as the Argos went on to win 27-24 over the Calgary Stampeders.

Meanwhile, Canadian offensive lineman Brett Boyko, who was released over the weekend by the Los Angeles Chargers, is awaiting an injury settlement before deciding on his future, reports Lalji.