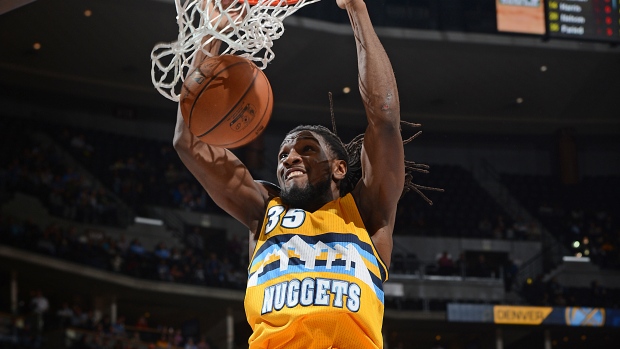 DENVER - An increased tempo has the Denver Nuggets running and smiling after a dismal six-week stretch.

Kenneth Faried had 19 points and 11 rebounds, and the Nuggets routed the New York Knicks 106-78 on Monday night.

Wilson Chandler had 17 points before leaving with a sore left knee and Will Barton also scored 17 for the Nuggets, who enjoyed their second-largest margin in a win this season.

The Nuggets continued an offensive revival under interim coach Melvin Hunt. They are 3-2 after losing 18 of 20, costing Brian Shaw his job last week. Under Hunt, they have scored 100 or more points in all five games.

"Playing at that pace is fun. It's exciting," Faried said. "The fans get into it, we get into it, we get to stand up for a big play. It's not just, bring the ball upcourt, pass it into the post. It's more like bring it up, pass, cut, backspin, spin, lob — all that stuff."

The Knicks lost their fourth straight and fell to 12-50, the NBA' first 50-loss team this season. Alexey Shved had 19 points for New York, which has just seven wins in 2015.

The Knicks had just 10 players dressed for Monday's game.

"When you have guys out it's a reality, and every team goes through it," coach Derek Fisher said. "That really doesn't excuse any particular effort by any particular guy on our team."

The lead grew to as much as 34 in the fourth. It was the largest lead of the season for the Nuggets, who tied a season low with eight turnovers. They didn't have a turnover in the second or third quarter.

The matchup between two of the worst teams in the league was close late in the second quarter when the Nuggets went on a run to take control. Faried had a dunk and Randy Foye hit a jumper before Andrea Bargnani drained a 3-pointer to pull the Knicks within 43-40 with 3:13 left in the half.

Denver scored the next eight points to go up by 11 and then ended the half with four points in the last 2.1 seconds. Joffrey Lauvergne hit a layup and was fouled. He missed the free throw but Darrell Arthur tipped in the rebound to make it 55-40 at intermission.

"We allowed the game to get away from us those last few minutes in the second quarter," Fisher said. "That's really a part of being in this business and being in this league, being able to finish quarters, finish halves."

The Nuggets quickly went ahead 65-45 on Ty Lawson's 3-pointer early in the third. The margin stayed near 20 for most of the quarter until Denver scored the last 14 points of the third to lead 91-59.

Knicks: Forward Quincy Acy did not play because of a sore left knee injury. New York coach Derek Fisher said before the game Acy hurt his knee during Saturday's game but didn't feel pain or discomfort until that night or Sunday morning. He will likely get an MRI done in the next few days, Fisher said. ... G Tim Hardaway Jr. missed the game with back tightness.

Nuggets: Forward Darrell Arthur played despite having tightness in his right calf that forced him out of Saturday's game. ... C Jusuf Nurkic took part in the morning shootaround but is still out because of a sprained right ankle.

With the game well in hand, Nuggets forward J.J. Hickson lobbied Hunt to allow Faried to stay in until he got his 18th double-double of the season. Faried grabbed his 10th rebound with 4:50 left and came out soon after.

Knicks: At Utah on Tuesday.