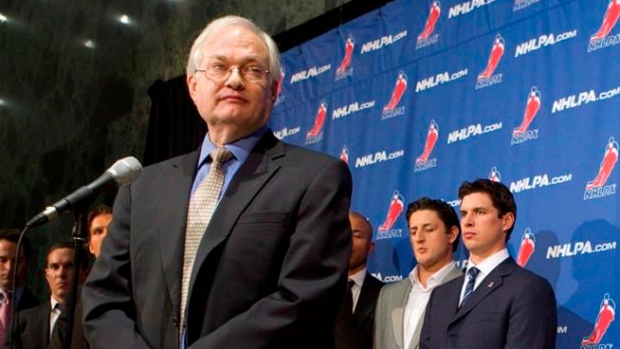 Donald Fehr is approaching six years in his post as the head of the NHL Players' Association.

In advance of the World Cup, the 68-year-old sat down with The Canadian Press to discuss next month's tournament and other issues in the game, including fighting, future lockouts and European expansion.

CP: Was there any reluctance on the players' side to the timing of the World Cup right before the season?

Fehr: You can write down that I chuckled because the answer is there is no time that doesn't cause pressure somewhere ... And it's not that pre-season is the best time, but it probably is, at the moment, better than the others ... There has been some informal discussions, for purposes of this World Cup that never rose to the level of serious consideration, that maybe we ought to do it in February. And it's conceivable that that would be considered going forward. But I for one, don't want to make any judgments in that regard until this one is over and we see how it goes.

CP: How does the cycle of lockouts get broken?

Fehr: The general sense I've had is that for a very long time now in all the salary-cap sports, every single one of them, there is a lockout in every single negotiation. The NFL even locked out its referees for God's sake. I mean, give me a break. Why do they do that? Because the way the agreements are structured (the owners) basically think they've got a free shot at the players. How do you break that? You hope you end up in a circumstance in which everybody is persuaded that an agreement, mutually acceptable, acceptable to both sides, can be reached without having to go through that. Baseball is not a cap sport. It's the only one which does not have, over the last 20 years, a history of stoppages by lockout or by strike. It took the battle royale, 94/95 (MLB players strike during which Fehr was head of the union), to persuade the owners that they didn't have to fight over those issues anymore ... My advice to the players is given the history, when you go into negotiation, what you do is you hope for the best and prepare for the worst.

CP: So is the answer to stopping the cycle no cap? And is that something you would ever push to get back?

Fehr: The answer is the players make those decisions as you get there. And we're a long way from there. And people talk about what the decision is — Is it cap or no cap? Is it this or is it that or something else? — that's not the decision you make. Everybody says "Why didn't you negotiate this?" The problem is most of the "this" things they talk about are not available options. When you get down to whatever you think the end is of the negotiation, the question is, is the agreement which is achievable preferable to the alternative, which is ordinarily a shutdown. That's the decision you've got to make.

CP: So it's not going into the fight saying "We're getting this back"?

Fehr: It might be. You might take very strong positions. But that's a decision the players make at the time. And you might say "Well, why can't you make it now?" Well, I don't know what the economic issues are going to be at the time (and) I don't know how the players are going to be feeling. And our membership will turn over more than 50 per cent between now and then. I'm not even talking to the same people.

CP: I asked (NHL commissioner) Gary Bettman if the NHL would ever pursue getting rid of fighting and he said the only way that it would ever happen is if the PA consented.

Fehr: Legally that would have to happen. And historically, the guys have had views about it which is that hockey is basically a traditional game and to an extent that's been there. That said, it's absolutely clear that over the last several years the incidence is diminishing and I don't see anything which would change that trend.

CP: But is it a conversation you ever have where you just say this doesn't serve a purpose in our sport anymore?

Fehr: If you're saying, is it a subject that at appropriate times we would broach with the players to get reactions? Of course.

CP: Has European expansion ever come up as something that you think the players would be into considering?

Fehr: Only in terms of — and this is internal discussion, not with the NHL — only in terms of either people saying 'Look the KHL is doing this or that or the other, what do you think?' Or in terms of saying 'We have so many European players we want to go international, do you think you could do something over there?' Personally, and I'm not speaking for the players now and I'm certainly not speaking for the NHL, I'd like to see over time an analysis in connection with the whole international development as to whether it would work. That said, it's wrong to suggest that it's on the immediate horizon.

— This interview has been edited and condensed