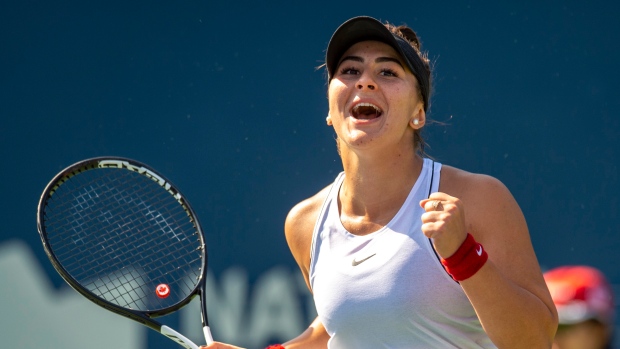 TORONTO – After claiming a historic title in Toronto and rising to No. 14 in the WTA rankings, Bianca Andreescu has to be considered among the contenders to win the US Open.

Yes, she's still a teenager and has never been past the second round of a major before, but the Mississauga, Ont., native has already proven this season that she’s a special talent.

Here are five reasons why the rising Canadian star can win it all in Flushing Meadows.

Andreescu was faced with potential distractions and big expectations at the Rogers Cup last week, but never let the moment get the best of her.

“I actually like that,” she said. “I like the pressure of playing at home. It really motivates me.”

Andreescu channeled her emotions and found a way through some tough moments improving to 15-3 in three-set matches across all levels this season, including 10 straight wins.

“In those moments, I just let loose, really,” she explained, “because I know when I do that, I play my best tennis. It's when I just stay relaxed and I go for my shots.”

Andreescu isn't impervious to nerves, but she manages to recover quickly after they hit. In the semifinal against Sofia Kenin she blew a 5-2 lead in the second set, needing five match points to eventually get across the finish line in a tiebreaker.

“I don't think I've ever seen her that nervous,” said coach Sylvain Bruneau. "So, it shows that it really meant a lot to her, the chance to play in the final here at home and it got to her a little bit ... we work on that, but you got to go through this and live these experiences. It’s part of growing up and she did great. I'm just really proud of how she regrouped in the tiebreaker and finished strong with some powerful shots and releasing her shots."

There were plenty of times last week when Andreescu could have let the moment get the best of her.

In the first round against fellow Canadian Genie Bouchard, a player she grew up admiring, Andreescu lost the first set before shaking off the rust and staging a comeback.

In the second round, Andreescu fell behind again, losing the first set and then trailed 5-3 in the final set before roaring back against Daria Kasatkina.

In the third round, Andreescu started strong before squandering a match point in a second set tiebreak against Kiki Bertens, but came back strong in the final set.

“That was really upsetting,” she admitted. “I had it 5-2 in the tiebreaker, so I went to the washroom and tried to regroup as best I could. I changed my clothes, so maybe that helped, because I was really sweaty. And I just went out there and pretended like it was the beginning the match.”

In the quarter-finals against Karolina Pliskova, she got off to a great start by winning the first set 6-0 before losing the second set 6-2 and needing a medical timeout to deal with a groin issue.

“It was disappointing, but things like this happen,” Andreescu said after pulling out the match 6-4 in the third. “And it's hard not to focus on that when it's hurting every point. But at that moment, when things happen like that, I just try to focus on the tactics I'm supposed to perform and forget about the pain. But it's not easy ... I just told myself, ‘Go big or go home.’”

Andreescu's ability to find a way to win is something that's been on display all season. She played through a shoulder injury at the Miami Open winning three matches before eventually retiring in the fourth round.

"Looking back now, watching her play through Miami in March injured and how she was able to still do what she did there is pretty special​," Tennis Channel analyst Lindsay Davenport told TSN during an interview at the French Open.

Andreescu says she uses meditation and visualization techniques to sharpen her mental game.

​3. Andreescu plays her best against the best

After beating No. 5 Bertens and No. 3 Pliskova last week, Andreescu is​ 7-0 against top-10 opponents this season. Earlier this year she defeated then No. 3 Caroline Wozniacki in Auckland while upsetting Angelique Kerber and Elina Svitolina in Indian Wells. She beat Kerber again in Miami.

She also beat Venus Williams, a legend of the game, in Auckland, and two-time major champion Garbine Muguruza in Indian Wells.

Where does the belief come from?

“It comes from deep within,” she explained. “I've been practising a lot on trying to figure out what to do in these kinds of circumstances … when I step out on the court, I'm fearless. I show no mercy no matter who I play, and I think that's showing a lot.”

Andreescu may be young, but there's a reason Serena Williams describes her as an “old soul.”

“She definitely doesn't seem like a 19-year-old in her words, on court and her game, her attitude, her actions,” Williams explained.

Andreescu makes up for her inexperience by relying on her high tennis IQ.

"I've learned this from our coaches, she is unbelievably smart on court," said Tennis Canada president and CEO Michael Downey. "She's probably one of the most strategic players out there and it's because she's got this bevy of weapons and she uses it all over the place.”

When Plan A doesn’t work, Andreescu goes to Plan B and Plan C.

“It was definitely a game of cat and mouse,” Andreescu said after beating Kenin on Saturday. “We were drop-shotting each other, we were coming to the net, all that stuff. So it's never easy to play someone like that, but I think I did it a little bit better today.”

4. Andreescu has big-time momentum and confidence

Andreescu hasn't lost a completed match since Kenin beat her in the Acapulco semifinals in February. She's now posted 17 straight wins when healthy enough to finish.

During the trophy ceremony on Sunday afternoon she declared, “This is only the beginning.”

I asked her to expand on that afterwards. What's her potential?

“If I keep putting in the work, if I keep believing in myself and not getting intimidated by who I play, then I really believe I can be No. 1 in the world,” she said.

And the shoulder injuries this season, which cost her all but one match in the clay and grass seasons, have only left her hungry for more.

“When I got re-injured, for sure I was the most upset I have ever been because I thought I was doing the right things,” Andreescu said. “But I'm a pretty optimistic person. So I just try to look at the best in every scenario, and that's what I did. I changed a lot of things, and those things didn't come easy to me. I had to make a lot of decisions too. But in the end, it’s all worth it.”

5. The women's draw is wide open

Serena Williams hasn't won a title since returning from maternity leave last year and has been plagued by injury issues this season. She's always a favourite, but the aura of invincibility is gone.

Naomi Osaka is the defending champion in New York, but admitted the pressure of being No. 1, a ranking she just regained, got to her leading to underwhelming results after her Australian Open win in January.

I’ll leave this here just in case you feel like reading a book lol. pic.twitter.com/UD512lBRP1

Simona Halep won the last major at Wimbledon, but has never made it to the final at the US Open and lost in the first round in each of the last two years. By match record, it's her worst major.

There has been a first-time major champion on the women's side in each of the last five years, including Ashleigh Barty at this year's French Open. Barty, who fell to No. 2 in the rankings after an opening-match loss in Toronto, made it to the fourth round at last year's US Open, her best result there.

So, the opportunity seems to be there for someone else to breakthrough.

Andreescu’s victory on Sunday was her 24th in a tour-level hard-court match this season, one more than Pliskova for the overall lead.​ Considering her injury absences, she should have plenty of gas left in the tank, especially after pulling out of Cincinnati this week.

Canada has never had a singles Grand Slam champion and a healthy Andreescu certainly has a chance to end that drought in New York. She has the game. She has the smarts. She has the mindset.