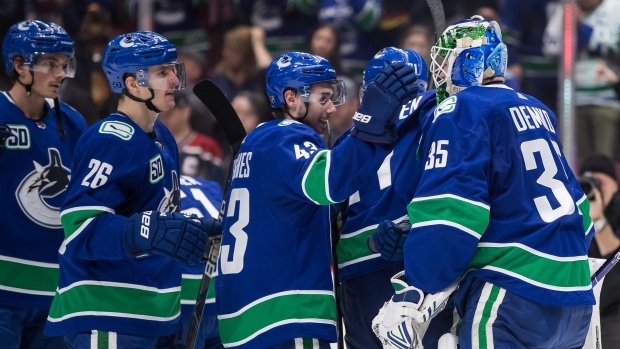 1) As it turns out, the third time was the charm for the Vancouver Canucks. After letting third period leads get away in their last two games, the Canucks were full value their 6-3 victory over Colorado on Friday night. After a loose first period in which they outscored the Avs 2-1 but were outshot 18-7, the Canucks tightened up their game considerably over the final 40 minutes allowing just 14 Colorado shots the rest of the way. And rather than sitting on their 4-3 lead after two periods, the Canucks extended their cushion and put the game out of reach scoring the only two goals of the final frame. The Canucks made the necessary adjustments defensively to slow the Colorado attack as the night went on. There is never any stopping Nathan MacKinnon entirely -- he had two assists, four shots and 12 attempts and looks like a threat every time he's on the ice. But the Canucks didn't allow MacKinnon to dominate the hockey game and swing the outcome in the Avs favour. According to Natural Stat Trick, the Avs had just four even strength shots on goal and five scoring chances at 5-on-5 over the final period. It felt like a much more controlled night of hockey by the home team than we've seen of late when they had the lead and couldn't make it stand up.

2) The Canucks third line had its game of the season. The trio of Adam Gaudette between Antoine Roussel and Zack MacEwen combined for three goals and six scoring points. Roussel's goal at 12:17 of the second period put the Canucks in front for good at 4-3 while MacEwen scored his first of the night 2:12 into the middle frame and then put the dagger in the Avalanche with the 5-3 goal with just 3:17 remaining. Both of his goals came on big-league shots just weeks after Canucks General Manager had declared MacEwen a 'full time NHL'er.' MacEwen did all of his damage -- two goals on two shots, four hits and drawing a second period penalty -- in just 7:15 of ice time. While his ice time was low, his impact was anything but. And his second goal was a clear nod from the coaching staff to the kind of night MacEwen and his linemates were having. With the Canucks up by one and with ghosts of recent games hovering over them, Travis Green utilized a line with two youngsters and his trust in that combination paid off when Roussel worked the puck from behind the net to MacEwen in the slot and the Big Fella roofed the puck short side on Colorado goalie Pavel Francouz. Aside from a Tyler Motte goal in Toronto on Saturday, depth scoring had left the Canucks during their losing skid. But the third line stepped up in a big way and that performance was key to delivering a much needed victory.

3) The Canucks power play went 0 for 3 on the night, but that didn't really matter to the bottom line of the hockey game. What was important to note about two of the three Canucks opportunities with the man-advantage was that they came back to back to open the third period. Veteran defenseman Erik Johnson was called for slashing 1:38 into the third and at 3:26 Vladislav Namestnikov was whistled for holding. The Canucks didn't do a lot with those four minutes over overlapping power play time that included a brief 10 second two-man advantage. But the most significant development of that stretch of the game was that it kept Nathan MacKinnon on the Colorado bench since he doesn't kill penalties. He had a 30-second shift to start the period, but then his team ran into penalty problems. MacKinnon didn't get his second shift of the period until the five and a half minute mark. The best way to contain one of the most-dangerous players in the league is to keep him on the bench and limit his opportunities to even the score. As it turned out, of the three periods on the night, MacKinnon played the least in the third when his team needed him the most.

4) MacKinnon still had his moments in the final period, but perhaps his most-noticeable sequence was snuffed out by Canucks defenseman Chris Tanev. With Alex Edler off for hooking and the Avs operating on the power play with a chance to tie the game, MacKinnon wound up for a one-timer from the circle to the right of Thatcher Demko but was unable to test the Canucks netminder. That's because Tanev stepped into the shooting lane and blocked MacKinnon's blast with his shin pad. It was the biggest of his eight blocks on the night -- a new season-high for any Canuck player. And the value of that play was underscored as Tanev's teammates made a point of seeking him out for a tap on those same shinpads as the puck flew up, over the glass and out of play. The shot block came on one of three Colorado power plays on the night. The Canucks were perfect on the kill and limited the Avs to just four shots on goal with the man-advantage. The Canucks penalty kill had struggled of late allowing seven goals on 18 opportunities entering the night including a pair of late power play goals in Columbus last Sunday. But with Demko providing the last line of defense and the penalty killers in front of him doing their part, too, the Canucks were able to shore up a sore spot in their game. They had key penalty kills at 1-0 in the first period and again at 4-3 in the third. Goals there could have swung this game in Colorado's favour, but the Canucks ensured that didn't happen.

5) It wasn't quite the Boston game of three weeks ago, but Friday was another solid showing by the Canucks against a top team in the league -- and one that arrived on their doorstep on a roll. Colorado was 7-0-2 in its last nine games overall and had won nine in a row on the road. Teams weren't taking points off the Avalanche of late. So give the Canucks credit for stepping up when they absolutely had to. Sure there are 15 games still left on the schedule so another loss wouldn't have sunk them, but given the recent blown leads, four straight regulation losses at the wrong time of the year and the mood in the market, it sure felt like the Canucks needed Friday's win. And they delivered. With Winnipeg blanking Vegas earlier in the night and temporarily moving in front of Vancouver for a few hours, it marked the first time since December 28th the Canucks had dropped below the playoff bar. But with their win, the Canucks ensured they won't spend the night looking up at eight teams ahead of them in the standings. Friday was a good night for the Vancouver Canucks. The challenge now is to back it up with another strong result on Sunday when Columbus comes to town. The Blue Jackets stop off in Edmonton, so the tables will be turned from a week ago. Last Sunday, the Canucks were playing back to back when they visited Nationwide Arena. Now it's the Canucks turn to get Columbus playing on consecutive nights.