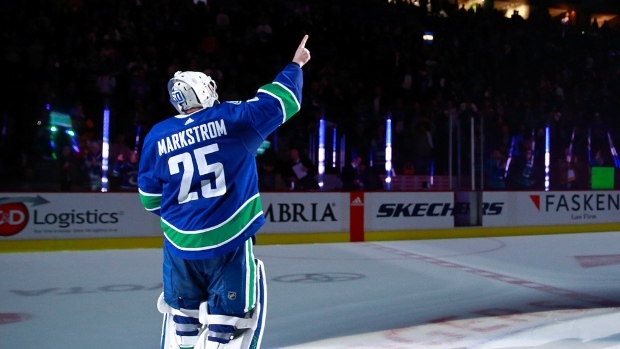 1) From start to finish, it’s hard to imagine Wednesday could have gone much better for the Vancouver Canucks. Oh sure, the team may have wanted to offer up a little more resistance against the Chicago Blackhawks, but with Jacob Markstrom in the zone that seems like a minor detail in the big picture. The more significant aspects of the day were that the organization absolutely nailed the pregame ceremony for Daniel and Henrik Sedin. The team on the ice then went out, scored once in each period and rode the remarkable netminding of Markstrom to beat the Blackhawks 3-0. This 50th anniversary season has featured a handful of terrific theme nights – the home opener, Alex Burrows added to the Ring of Honour, Monday’s Legends Night – but all paled in size and scope to honouring the Sedins for their two decades of excellence. The Canucks did it up in style and checked every box imaginable from the video highlights, to the guest list to giving Kevin Bieksa free rein at the microphone. The ceremony was touching, it was funny and it was heartfelt. And it brought back the roars that accompanied the greatest era in Vancouver Canucks history. While the Sedins playing careers spanned nearly twenty years, Wednesday very much felt like a 2011 reunion with Bieksa, Roberto Luongo, Alex Burrows, Jannik Hansen and Ryan Kesler hand-picked by the twins to join them on the ice for the ceremony. Kudos to the Canucks game presentation staff for such a fitting tribute to the two best players in franchise history.

2) Markstrom has had a number of incredible individual performances this season, but Wednesday’s was his best. He stopped all 43 shots he faced in a 1-0 overtime win against Carolina in early December and then stopped 49 shots in a 3-2 win over Los Angeles in the game out of the Christmas break. Those nights he seemed locked in and on top of his game, but this felt like a next level performance. Not only did he set the Canuck franchise record for saves in a shutout (49), but set the mark for saves by a Swedish goalie in an NHL shutout. Markstrom stopped 17 shots in the first period, 16 more in each of the second and third. He was forced to make 13 saves before his team registered its first shot of the night at the other end of the ice. And his best save was likely one off the Blackhawks best player. With the Canucks up 1-0 five minutes into the second period, Patrick Kane took the puck off right wing and moved uncontested into the slot. At that point, it became a match-up of Markstrom against one of the best players in the league over the past decade. Kane unleashed a wrist shot that Markstrom took up high, but was able to stop. It seemed to signal to the entire Chicago team that if their best player couldn’t beat Markstrom, no one was going to on the night.

3) With Tyler Motte injured and Tim Schaller a healthy scratch, the Canucks penalty kill had struggled in recent games using new personnel and giving up five goals in the past four outings. But on Wednesday, backed by Markstrom’s brilliance, the Canucks penalty kill was perfect holding the Hawks at bay on all five attempts. While Chicago registered 10 shots on its power play, it couldn’t solve Markstrom with perhaps the best chance coming late on a second period power play when rookie Kirby Dach had the Canucks netminder down, but he clearly wasn’t out. Dach tried to pull the puck around Markstrom who was somehow able to hold his ground to make a sprawling save. With Tyler Myers taking an early hooking penalty just 2:21 into the game, the Canucks penalty kill was forced to get to work early. That was a key point in the hockey game since the Canucks were off to such a sluggish start. A Hawks goal with the man-advantage could have changed the complexion of the hockey game, but the Canucks penalty killers came through there and on all four other occasions over the course of the night helping the Canucks win their second straight game after four consecutive setbacks (0-3-1).

4) JT Miller and Quinn Hughes lead the Vancouver Canucks in scoring since the All Star break. That’s not a huge surprise. But the fact that Brandon Sutter is third on the list would likely catch many off guard. Sutter had a goal and two helpers on Wednesday giving him 3+4=7 in his last eight games. With his empty net goal against the Hawks, Sutter has now scored in back to back games. This is a player that has primarily been tasked with defensive assignments when healthy this season. But with Brock Boeser out of the line-up, Sutter has been added to the Canucks top power play unit and has found himself in more offensive situations than usual. Prior to this run of offence, Sutter had gone 11 games without a point and you wondered if he’d pick up another one the rest of the way this season. But suddenly he’s swimming in offense. He made a nice one-touch pass to set up Bo Horvat’s power play goal. He found Antoine Roussel alone in front of the net on the Canucks second goal by Adam Gaudette and then sealed the deal with the empty netter with 2:09 to play. On the night, Sutter trailed only JT Miller and Bo Horvat in ice time among Canuck forwards playing a season-high 19:02 including 3:28 on the power play and 3:50 on the penalty kill.

5) The Canucks have now won back to back games on home ice and 11 of their last 12. Since December 2nd, they are 14-3 at Rogers Arena and lead the NHL in home ice wins with 14 and points with 28. The consecutive wins – and the remarkable home ice record -- have allowed the Canucks to solidify their hold atop the Pacific Division and extend their lead to six points over Winnipeg – the team currently just below the playoff bar in the West. Beyond the Jets, though, the Canucks are nine in front of Minnesota, 10 up on Nashville and now a full 11 points ahead of the Blackhawks. At this time of year, those are nearly insurmountable deficits for the Wild, Preds and Hawks. It remains my firm belief that nine (or more) teams in the West will not reach 94 points this season. With that in mind, the Canucks are back on a 97 point pace while a team like the Jets is on pace for 89 points. The playoffs are not a guarantee yet for the Canucks, but they continue to give every indication that they will be among the teams that qualify for the post-season this spring.