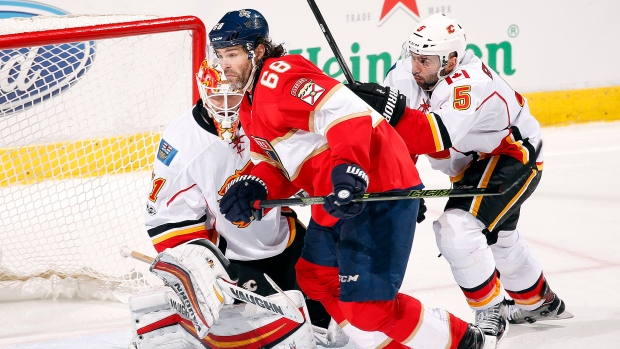 The Calgary Flames have signed veteran free agent Jaromir Jagr to a one-year deal, with a $1 million base salary and another $1 million in attainable bonuses.

TSN Hockey Insider Pierre LeBrun reported earlier on Monday that the two sides were working towards the one-year agreement.

If indeed Jagr deal gets done in Calgary, am told it's for $1 million base salary plus another $1 million in attainable bonuses

The deal might not be official for another couple days as the Flames are working on immigration paperwork with Jagr still overseas and not expected to be in Calgary until Wednesday. LeBrun notes that this will give the Flames time to make roster decisions before the Tuesday deadline.

Armstrong, assistant GM Martin Brodeur and head coach Mike Yeo all spoke with Jagr over the weekend prior to making the offer, but were informed that the 45-year-old had chosen to go in another direction.

LeBrun reports the offer from the Blues was similar to the deal Jagr accepted from the Flames. His contract leaves the Flames with $2.64 million in cap space for this season, according to Cap Friendly.

I believe the Blues' offer to Jagr was similar to what he has signed in Calgary ($1 M base salary plus $1 M in bonuses). He chose the Flames

The 45-year-old winger made it known that he wants to continue playing in the NHL, but hasn't been able to find a team to play for this off-season.

Jagr scored 16 goals and added 30 assists over 82 games with the Florida Panthers in 2016-17, his third year with the organization and 24th in the NHL.

The native of the Czech Republic is coming off a one-year, $4 million contract.

The five-time Art Ross Trophy winner and former league MVP sits behind only Wayne Gretzky all-time with 765 goals and 1,149 assists for 1,914 points. He currently sits 56 games back of Gordie Howe for the most games played all-time.

Calgary opens the season Wednesday night in Edmonton against the Oilers, while opening night rosters are due by Tuesday afternoon.