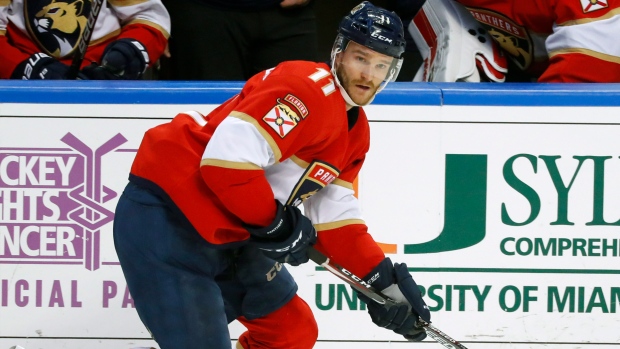 Jonathan Huberdeau's eyes lit up when he saw the projected Team Canada roster for the 2022 Olympics produced by TSN director of scouting Craig Button last week. The Flori​da Panthers left winger was slotted in on the top line with Edmonton's Connor McDavid and Colorado's Nathan MacKinnon.
​
"A little surprised," Huberdeau admitted with a chuckle. "I don't know if I can follow these guys. They might be too fast for me. Obviously, two of the best players in the league so it's really flattering. That would be great to play for Team Canada. That would be my dream and why not? The year 2022, if we can go, that would be my year that I would have a chance."

“We missed out on Crosby and McDavid 🇨🇦 in 2018...we cannot miss out on them in 2022...”@CraigJButton & @GinoRedaTSN look ahead to #Beijing2022 and what a few of the teams could look like if #NHL players are there: https://t.co/Sy9PMKiT9a#TSNHockey pic.twitter.com/JW80N3hkUo

Huberdeau wore Canada's colours twice at the World Juniors, winning bronze in 2012 and finishing fourth in 2013. The native of Saint-Jerome, Que. feels like he has some unfinished business.

"You start at the World Juniors and after that the Olympics are the biggest thing," Huberdeau said. "If you go there it's not just hockey it’s every sport and the parade [of nations], everything about it is great. I always watched. I didn't get the result in World Juniors I wanted so I think going to the Olympics would be the greatest thing."

Huberdeau has certainly earned his spot among hockey's elite. During the last two seasons he has 170 points, which is ninth overall in the National Hockey League just ahead of Steven Stamkos and just behind David Pastrnak.

"It's confidence and consistency," he explained, "that's the big thing. I've been better and more consistent than the other years. But I'm happy with my career right now and where it's been. I've always gone up in points and I think I elevated my game every year and that's what I want to do. I'm not satisfied. I want to be better and I work every summer to come back and be a better player year over year."

Before he wears the Maple Leaf in international competition, Huberdeau is focused on chasing down the Maple Leafs in the playoff race. The 26-year-old is holding out hope the regular season will resume and believes Florida can close a three-point gap with Toronto in the Atlantic Division.

Huberdeau, the third overall pick in the 2011 draft, spoke with TSN via Zoom on Tuesday and reflected on his first all-star game appearance and revealed the message he's received from coach Joel Quenneville​during the season pause.

Panthers defenceman Aaron Ekblad says no one in the NHL passes like you. Who are some of the playmakers you admire?

"There's a lot of guys. [Brad] Marchand has pretty good vision, a guy who makes some crazy passes. That line is really good. There's a lot. Kevin Hayes is a great passer. It's tough to say now."

Do you think your patience has grown along with your confidence?

"This has been my strength my whole life so I tried to bring that in the NHL ... Sometimes I'm too patient, but it's not because I'm patient in life (laugh). But on the ice, patience, strength and confidence go together for sure."

You were having another excellent season and earned an invite to your first all-star game. What is your top memory from that weekend?

"Just being with the guys and your family. You can enjoy everybody and everybody is more relaxed. You're playing three-on-three and I really like the format and that was fun. At the end, in the final the guys tried to win. It's for fun, but at some point guys get competitive. It was great to meet some guys that you don't usually get a chance to talk to much."

Who's someone you met that you didn’t know before?

"Pastrnak was our captain and I was sitting beside him so you talk. I look up to Shea Weber. He's been in the league for a lot of years and plays in Montreal so I talked to him and said, 'Maybe next time don't cross-check me in front of the net (chuckle).'"

"Well, it's not great. I've had a couple, but that's his game. And, I was just kidding. He plays solid. You just try and become a little more friendly."

"He was funny. He had a good attitude and why not? He's one of the best players in the league and he's having a great season. He's so good skills-wise, he's unbelievable, and he was a good guy."

Had a blast at my first #NHLAllStar game ! Thank you to the @StLouisBlues & city of St. Louis for the hospitality this weekend. See everyone in South Florida next year 😎 pic.twitter.com/GAq6lHmAVG

Florida ​won six games heading into the all-star break and then struggled afterwards going 5-10-3 from the start of February into early March. What happened?

"I don't know what happened. I wish I could tell you, but we weren't playing the same hockey we were before the all-star game. And right before the virus [pause] we had won two in a row and were feeling good and now another break. I feel like every time we get a break it's when we're rolling. When we come back we have a lot of games and we just got to win them all."

One of the games you had left was against the Leafs. You guys won two of three meetings with Toronto this season. How did you view the matchup?

"I feel like all our matchups were offensive. We have to tighten up a bit on defence, because we know they're a really good team offensively, it's crazy. We try to manage their first two lines. The matchup has been good. Every game is exciting, because we're close in the standings and it went back and forth. That last game would've been fun."

How do you feel about the potential of the season resuming: optimistic, pessimistic or unsure?

"We got to stay positive and optimistic. My mindset is we're going to play. You got to tell yourself that and make sure you're mentally ready and physically you try and stay in shape. We don't know what's going to happen. There's a lot of plans on the table and it's just about knowing if we can do it or not."

One of the plans is to have teams quarantined in a few select cities, which would mean potentially being away from home for months. Is that a reasonable scenario?

"Obviously, it's not the way we would imagine it to be, but if it's the only way we can finish the season then we just got to do it. It's a chance to award the Stanley Cup and that's what we work for the whole year from training camp so if that's what we have to do then we're probably going to do it."

“Some players could be away from their families 3-4 months and I think that’s way too much. I’m not the only one thinking like that, I’m sure.”

Phillip Danault on what many players think as the #NHL continues its return plan.

What have you heard from coach Joel Quenneville​ since the season was paused? What's his message?

"To keep your mindset positive that we can come back. I talked to him twice. He wants us to think we're in a good position, we're only three points out with a lot of games left so whatever happens we got to come back [strong]. The stoppage will be different for every team but, for us, we're in it so we got to be ready."

This week TSN released its all-time Canadiens team. You grew up a Montreal fan, who's your favourite all-time Habs player?

"Guy Lafleur is the player I like to watch the most. He was just coming in and taking a slapshot and the goalie, at that time, couldn't stop it. His shot was really powerful and his speed ... they've been playing all the [old] Montreal games and you can see hockey has changed so much."

Presenting the #AllTime7 Project, naming the all-time teams for each of the seven Canadian 🇨🇦 #NHL clubs...

We begin today with the Montreal Canadiens: https://t.co/v40FK0i6os

You would already be on the all-time Panthers team. This season you became the franchise scoring leader. What do you enjoy about playing in Florida?

"I enjoy a lot of stuff. I mean, the weather is a big thing. All my cars I got them convertible and I like to go top down to the game or practice. On a day off there's a lot of things you can do like go to the beach or sit at home by the pool so the weather is a big factor. When it’s sunny and nice out and you go to the rink you have a different mindset. It’s about bringing a winning team there and this year hopefully we can wind up in the playoffs and do some damage."