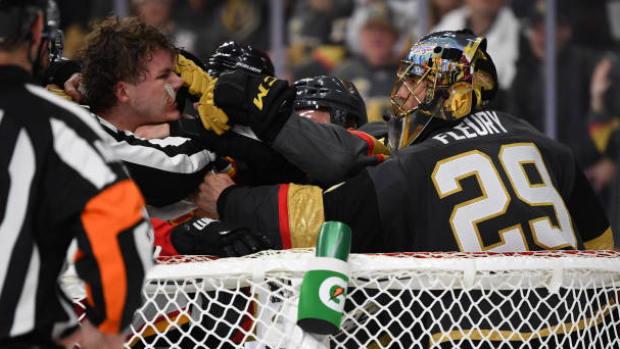 Vegas Golden Knights goaltender Marc-Andre Fleury was ready to engage in the first fight of his NHL career during Wednesday's 2-1 victory over Calgary, but it appeared Flames goaltender David Rittich was unwilling to drop the gloves with him.

The standoff between the two goaltenders occurred shortly after Flames forward Matthew Tkachuk bowled over Fleury late in the second period. As a scrum ensued in front of the net, a visibly agitated Fleury stared down Rittich, who had skated out to his own blueline. 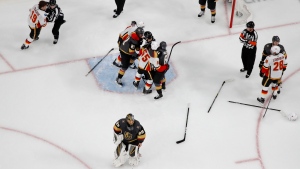 Fleury, who took off his glove earlier in the sequence, dropped his stick and unstrapped his blocker, but skated back to his net once it became clear Rittich would not engage him

"He came to the blueline so you feel a little challenge," Fleury said. "I don't want to be chasing a goalie around though. That's fine, I just thought he was gonna come. Nothing happened."

Fleury added that he would have fought off Rittich, saying, "I thought he was coming."

Rittich, who is also without a fight in his three-year NHL career, said he was trying avoid picking up an extra penalty for his team. "I didn't want to cross the red line and take a penalty," he explained after the game.

"We don't want him fighting, obviously," Gallant said of Fleury. "He's one of the top goalies, if not the top goalie in the league. He did a great job and he protects himself and he was fine. His job is to stop the puck and that's what he does."

Tkachuk received a two-minute minor for goaltender interference on the play and picked up an extra roughing call with Golden Knights defenceman Colin Miller.

Ten penalties were called in the first two periods, while Max Pacioretty received the only penalty in the third period for tripping just over two minutes into the final frame.

Flames head coach Bill Peters was unhappy with the disparity in calls throughout the game.

"I didn't like the fact the officiating standard changed," Peters said. "I thought the calls early were poor. Especially the [first-period roughing] call on [Garnet] Hathaway — a real poor call, real soft call this time of year. And then they put the whistles away in the third. So, in the first, everything is a penalty. And in the third, nothing is a penalty. ... I thought that standard definitely changed, and it doesn't help you when you're either chasing the game or trying to score to get it tied up. It is what it is."

The Flames and Golden Knights will meet for the final time this season on Sunday in Calgary.