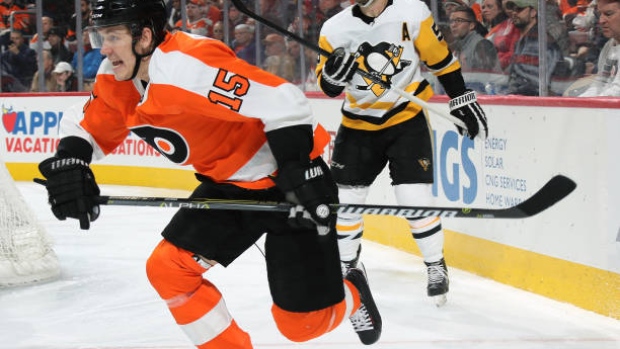 Lehtera, who is scheduled to carry a $4.7 million next season in the final year of his contract, struggled in his first season with the Flyers, scoring just three goals and posting eight points in 62 games.

Hextall noted, however, the team could change their mind and decide to part with Lehtera once the buyout window opens in June.

Hextall says right now the plan is to not buy out Jori Lehtera, but says that could change. Buyout window doesn’t open until June.

The Finnish centre was traded to the Flyers from the St. Louis Blues during June's draft for Brayden Schenn and two first-round picks (in 2017 and 2018).

Lehtera made his NHL debut with the Blues during the 2014-15 season and enjoyed immediate success, posting 14 goals and 44 points in 75 games as a rookie. The Blues signed him to his current three-year, $14.1 million extension that summer and Lehtera's numbers have declined in each season since. He scored seven goals and posted 22 points in 64 games with the Blues last season, leading the team to move on from him.

He had two assists in the Flyers six-game first-round series against the Pittsburgh Penguins.

Buying out Lehtera, would leave the Flyers with a $1.37 million dead cap hit in each of the next two seasons.

Hextall said Thursday the team hopes to re-sign forward Valtteri Filppula, but told the other pending unrestricted free agents on the team they will not be re-signed.

In addition to Filppula, forward Matt Read and defencemen Johnny Oduya and Brandon Manning are scheduled to hit the open market on July 1.

Read, who had a $3.63 million cap hit this season, split time this season between the AHL and NHL. In 19 games with the Flyers, he had one goal. He added one goal and two points in the team's playoff series.

Oduya was acquired from the Ottawa Senators ahead of the trade deadline, but played only game with the Flyers, posting a minus-1 rating. Oduya will be 37 in October.

Manning, 27, had seven goals and 19 points in 65 games this season. He's been with the Flyers since making his NHL debut during the 2011-12 season.

The Flyers, who have three restricted free agents in Taylor Leier, Robert Hagg and Petr Mrazek, are projected to have just over $17 million in cap space this offseason, according to CapFriendly.