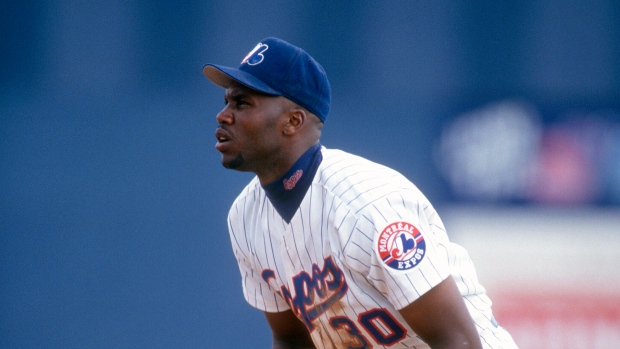 Cliff Floyd spent the majority of his childhood growing up playing on the inner-city baseball diamonds of Chicago. In the summer of 1993, he would commit to Creighton University in anticipation of taking his burgeoning baseball career to its next logical step; however all that would change following the final game of the Illinois State Championship when the voice of the public address announcer rang through the stadium.

“Congratulations to Cliff Floyd who has been drafted by the Montreal Expos with the 14th overall pick.”

“I had no idea what was going on,” Floyd recalls. “We had no technology back then. I didn’t really understand. There was no representative from the team. None of that … you don’t know what the heck is going on. You just won a state championship. What a way to find out.”

Floyd played 17 seasons in the Majors, suiting up for seven different teams. He won the World Series in 1997 as a member of the Florida Marlins and also appeared in the 2001 All-Star Game. Despite his illustrious achievements, few memories stand out more than his time in Montreal.

“It was awesome. I’m not just saying that. It was actually one of the best experiences I’ve had in the game,” Floyd says. “You couldn’t have asked for a better situation in terms of how they were able to find the right field coordinators, the right minor league coordinators to put all of the talent together. The organization was great. I thought we flourished as a unit.”

Montreal not only helped Floyd’s burgeoning baseball career, the city also helped him to grow as a person.

“I understood that it is a different region compared to the rest of North America,” he remembers. “You had options. You could take some French classes and learn how to speak and understand the language. Or you could just appreciate the city itself. Montreal was great. The people were incredible.”

Floyd was traded to the Marlins in 1997 but returned for a second stint with the Expos in 2002. He only played 15 games that year before he was dealt again to the Boston Red Sox; however those few games were enough for Floyd to sense that the team was not heading in the right direction.

“The only downfall in Montreal was that we had so many owners at each other’s throats about whether or not we should move the stadium downtown. The city lost the team because of it,” Floyd recalls.

“In today’s game, we probably would have been one of the best teams in that era – there was just so much talent. Maybe every year the Braves were just a little bit better but now with the extra Wild Card spot, we would have been there every year.”

Over the past several years, rumours have swirled about the possibility of a team returning to La Belle Province. This past March, Montreal mayor, Denis Coderre legitimized the rumours by discussing a potential return of the franchise during an in-person meeting with the Commissioner of Baseball, Rob Manfred.

“I think the chances [of a return] are really high. Hockey is phenomenal but you need something else,” Floyd said. “You need [the Expos] back where you can go support them in a downtown stadium. The fans will eat it up. But I [also] think that you can’t put the cart before the horse. You’ve got to build a stadium first to show [the MLB] that you are really serious.”

Floyd is certain that baseball will never overshadow hockey in the puck-crazed city. He even suggests that the best comparison is just a few hours away in Toronto. The Blue Jays’ attendance continues to increase but the team doesn’t interfere with the popularity of either the Maple Leafs or Raptors.

Floyd, who appears regularly on the MLB Network, enjoys watching the high-powered Blue Jays’ offense but says that pitching and defensive inconsistencies have hurt Toronto in the standings.

Jays’ shortstop, Jose Reyes, with whom Floyd played with for four seasons with the New York Mets, has been highly scrutinized for his defensive play. He has committed eight errors this season, tied for the second most on the Blue Jays. Despite the difficulties, Floyd isn’t worried about his former teammate.

“When you’ve been hurt and you’ve been a guy that has been counted on so much, especially with a big contract, you try and go out there and prove that you are worth every bit of it,” Floyd said. “His main focus is to stay on the field. I know he has made a couple of blunders in the last few games. But at the end of the day, with Jose Reyes on the field, you are a better team. Bottom line.”

Floyd suggests that the most important issue that the Blue Jays need to address is pitching.

“If I am [General Manager] Alex Anthopoulos, I would put all my focus on improving the bullpen and the back end of the rotation. You know what you are lacking. Go get it. Put yourself in a position where come the end of July and August, you have the pieces that will make you better,” Floyd insists.

“You are three-and-a-half games out. You have to go after it. You don’t know how often this opportunity is going to come around.”