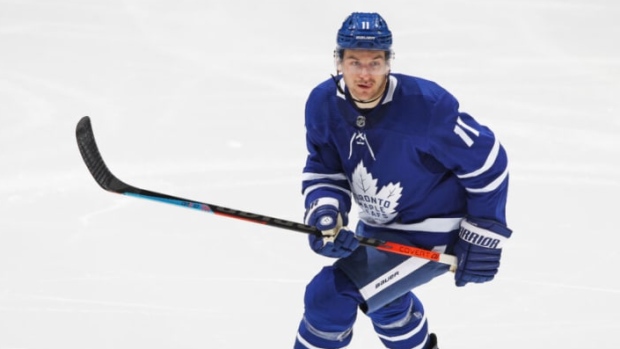 Zach Hyman needed a place to train. And he knew just the person to ask.

Having just put pen to paper on a big-money deal with the Edmonton Oilers in free agency following six seasons with his hometown Maple Leafs, Hyman's usual option — Toronto's practice facility — was clearly out of the running.

Shortly after the ink was dry, however, the gritty winger's phone rang.

Connor McDavid was on the line, and before Hyman knew it, he was part of former NHLer Gary Roberts' stable of pros who push each other every summer, including the Oilers' captain and reigning NHL MVP.

"This past year when we played Edmonton nine times was really the first time that I got to see Connor live," Hyman said looking back at the one-and-done, Canadian-based North Division created because of COVID-19 border restrictions. "You just see bits and pieces and you see the highlights, but then you get to actually play against him and actually see how good he is."

The 29-year-old was then provided a behind-the-scenes, front-row look at how the game's best player prepares.

"I got to see how hard he works in the gym and how much effort he puts in," Hyman continued. "It's not just natural ability. It's his drive and determination to continue to push himself and get better.

The Oilers open training camp ahead of the 2021-22 season Wednesday with renewed optimism and increased pressure to perform following a string of post-season disappointments.

It's a situation Hyman knows well from his time under Toronto's media spotlight suiting up alongside the likes of Auston Matthews and Mitch Marner.

"I actually really enjoy it," Hyman said of playing in Canada. "I wanted to go to a place that had a similar fan base. Edmonton fans are extremely passionate."

Hyman, who signed a seven-year, US$38.5-million contract, wouldn't bite when asked at last week's the NHL/NHLPA media tour if he'll be playing on a line with McDavid or Leon Draisaitl, but it's clear he'll once again find himself alongside elite talent.

"I've heard rumblings, but I don't know," Hyman, a fifth-round pick of the Florida Panthers at the 2010 draft, said with a laugh. "They're so different. Just seeing them in practice, it's crazy how good each of them can be using such different skill sets."

Oilers defenceman Darnell Nurse, who's also trains with Roberts north of Toronto in Aurora, Ont., and got to know Hyman this summer, is looking forward to seeing what the University of Michigan product adds to the roster.

"He brings an infectious amount of work that every team needs," Nurse said. "We have, obviously, a lot of skill, a lot of talent.

"But to have that work ethic added to the fold, and just to push each and every day, I think we're very fortunate to have him."

The Leafs counted themselves lucky as well after acquiring Hyman in a trade with Florida in 2015 before signing him to an entry-level deal.

"Everybody knows how I feel about Toronto," said Hyman, who was part of the group that lost five straight post-season rounds. "It was unfortunate that I wasn't able to have as much team success as I would have liked."

In a total of 345 regular-season contests with the Leafs, Hyman put up 86 goals and 185 points. He found the back of the net five more times and added eight assists in 33 playoff outings, including one during Toronto's crushing first-round collapse against the Montreal Canadiens in May after leading the series 3-1.

"The opportunity to advance and to do something was right there," he said. "This year in particular, the loss was extremely tough on everybody. I didn't watch the rest of the playoffs after it.

"I shut down for a couple of weeks and tuned out hockey because of the way we lost, and it was to Montreal ... it was tough."

But his focus quickly shifted to what was next.

And once it became clear Toronto was no longer an option, Hyman set his sights on Edmonton in unrestricted free agency — and not just because of the opportunity to play McDavid and Draisaitl, who have alternated finishing first and second in NHL scoring the last two campaigns.

"One of the most important things for me with the deal was security," said Hyman, who has a full no-movement clause for the first five seasons. "Being secure in a city and knowing that no matter what happens, you're not going to have to uproot your young family and move."

Hyman and wife Alannah, who welcomed their first child last December, got the opportunity to visit Edmonton before he signed, which sealed the deal.

"A lot of people think it was all about money when it wasn't," he said. "It was really about going to a team from a hockey standpoint that had an opportunity to win, going to a team that I believed in.

"And then going to a situation where I wouldn't have to uproot and move my family."

Hyman followed up the negotiations by getting to work on figuring out where to skate and train the rest of the summer.

He didn't have to go far.

"Just to get to know (McDavid) as a person, get to know Darnell," Hyman said. "From a comfort level to go to a new team to be able to meet and be comfortable with guys before you go was awesome."

This report by The Canadian Press was first published Sept. 21, 2021.