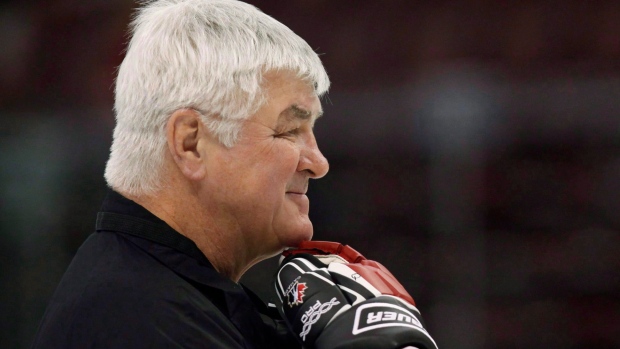 On the ice, behind the bench and behind his desk, Pat Quinn was an imposing figure.

"'The Big Irishman' is a guy that loves the game so much that when he walks in, you know hockey's in the room," longtime broadcaster and executive John Davidson said.

Quinn died Sunday night in Vancouver after a lengthy illness, the Hockey Hall of Fame and Vancouver Giants said Monday. Quinn, who was co-owner of the WHL's Giants, was 71.

The former NHL defenceman, longtime coach and executive went down fighting as colleagues raved about not only his hockey acumen but about the kind personality behind his gruff exterior.

Quinn led Team Canada to the gold medal at the 2002 Olympics in Salt Lake City, the country's first men's hockey gold medal in 50 years. He also coached the Vancouver Canucks to the 1994 Stanley Cup final, the Canadian world junior team to gold in 2009 and helped the Toronto Maple Leafs to the Eastern Conference final two times.

Long before that, Quinn led the Philadelphia Flyers to 35-game unbeaten streak that almost certainly will never be broken since ties have been taken out of the game. In 15 full seasons as an NHL coach, Quinn's teams missed the playoffs only three times.

That success came over the span of decades, as a coach and executive.

"He's not unlike a Scotty Bowman in that they're really bright guys," said former Washington Capitals GM George McPhee, who worked under him in Vancouver and made his son Graham's middle name Quinn as a tribute. "They were really intelligent and they could see the trends, they could see the fads, the things that were going to come and go and the things that would stay. Very perceptive and he adjusted and advanced."

Quinn was hailed by those close to him for having a heart to match his six-foot-three, 200-plus-pound frame. Maple Leafs director of hockey and scouting administration Reid Mitchell called Quinn a gentle giant who was a "larger-than-life kind of guy, in stature and even his smile."

Part of that stature was that Quinn was tough as they come.

"He's a real guy's guy. He's a man's man," Florida Panthers GM Dale Tallon said. "He's just a straight shooter and called it like it is."

Quinn was born in Hamilton on Jan. 29, 1943. A defenceman, he played Junior B before going to the Edmonton Oil Kings and winning a Memorial Cup in 1963.

Despite his imposing size, Quinn had trouble catching on in the NHL. His first training camp was with the Montreal Canadiens.

"Those days he was younger and less muscle-bound," said Hockey Hall of Famer Jacques Laperriere, who was a veteran on that team.

After playing for such minor-league teams as the Knoxville Knights, Tulsa Oilers, Memphis Wings, Houston Apollos and Seattle Totems, Quinn made his NHL debut with the Leafs in 1968. It was in 1969 he made his biggest impact as a player, knocking legendary Boston defenceman Bobby Orr out with a blindside hit in the 1969 playoffs.

Orr wrote in his book, "Bobby Orr: My Story," that a mysterious man was so upset about the hit that he offered to "take care" of Quinn. Orr declined, and Quinn played for the Canucks and Atlanta Flames before retiring in 1977 with an ankle injury.

Almost immediately, Quinn went into coaching and was an assistant on Fred Shero's staff in Philadelphia before becoming the head man for the Maine Mariners of the American Hockey League. During the 1978-79 season, he replaced Bob McCammon as head coach of the Flyers.

"For our team, Pat brought a complete change to the game that we had made so successful under Shero," said Bob Clarke, a Hall of Fame player for the Flyers, later their GM and now the team's senior vice-president. "You trusted what he was trying to implement with our team.

"We all just immediately trusted him, mostly, I guess, because of his presence. He was a big, strong man who was extremely honest and extremely bright. There was no fooling around."

The next season, Quinn's first full one as an NHL coach, the Flyers not only went 35 games without a loss (25 wins, 10 ties in an era with no overtime) but made it to the Stanley Cup final before losing to the New York Islanders. Quinn won the Jack Adams Award as coach of the year.

"It wasn't like we were an ultra-talented team or anything like that," Clarke said. "We weren't the Edmonton Oilers or the Montreal Canadiens. We had some good players and some journeyman players and he made us into a really good team that the style of game we played was ahead of the other teams in the league at that time."

After one more full season and most of another in Philadelphia, Quinn was fired and moved on to coach the Los Angeles Kings. His departure from Los Angeles to take the job of president and GM in Vancouver led him to be banned from coaching by then-league president John Ziegler.

In Vancouver's front office, Quinn drafted Pavel Bure a year ahead of when he was supposed to be eligible. Though he never practised law, Quinn knew the rules of Bure's eligibility based on games played overseas, and the Canucks were allowed to keep the future Hall of Fame winger.

Quinn returned to coaching during the 1990-91 season and won his second Jack Adams with the Canucks the next year when they went 42-26-12. Arguably his most memorable accomplishment came when the Canucks as the seventh seed in the Western Conference beat the Calgary Flames, Dallas Stars and Maple Leafs to reach their second Cup final.

The Canucks made it to Game 7 before losing to the New York Rangers.

Quinn went back to the front office in Vancouver, where he remained until he was fired by new ownership in 1997.

"What I always remember most about him is when it was time to talk to him about something, or he wanted to talk to me about something, walking into his office through the haze of cigar smoke, there was this huge, square-jawed, cigar-chomping Irishman who had a real presence about him and is intimidating at times," said McPhee, who was vice- president and director of hockey operations for the Canucks. "When you went to talk to him about things, you better have been prepared and knew what you were talking about."

Quinn went back to coaching in 1998 when he was hired by the Maple Leafs. Toronto went to the Eastern Conference final in his first season in 1998-99 and then again in 2002.

During the 2002 East final, Quinn missed two games with heart problems. At the time, he said he felt "lousy" about watching them on television.

"Like so many bright men, he allowed himself to get overweight, he smoked the cigars and loved to socialize," Clarke said. "Pat, for whatever the reasons, got heavy and I'm sure his lifestyle contributed to it, obviously, and then it caught up to him in the finals that year."

The Leafs made the playoffs in Quinn's first five seasons, which included a stint as president and GM.

"We had a lot of success playing for Pat, obviously, the years here with the Maple Leafs," longtime Leafs captain Mats Sundin said. "As a coach (he) had a presence in the dressing room that demanded respect and had a way of talking and getting the guys ready for each game that really got the best out of the teams that he coached."

That was evident when, at the 2002 Olympics, Quinn helped a group of all-star Canadians win the gold medal in Salt Lake City. It was just the second Games with NHL players but Canada's first gold since 1952.

Quinn was also behind the bench when Canada won the World Cup of Hockey in 2004.

"He demanded and commanded respect," said Mitchell, who worked under Quinn in Vancouver, Toronto and at international competitions. "Even the Olympic team, the World Cup team, he walked in that room and the superstars of the game were eyes wide open and wanting to be a sponge because this guy has so much hockey knowledge."

Replaced as GM by John Ferguson Jr., Quinn was fired as coach after the Leafs missed the playoffs in the first season after the 2004-05 lockout and the first one in the NHL played under a salary cap. After three years away, he coached the Edmonton Oilers for one season in 2009-10.

He also led Canada to world junior gold in Ottawa in 2009. Canada hasn't returned to the top of the podium since then.

Quinn most recently spent time as chairman of the Hockey Hall of Fame.

"He's a very intelligent hockey man who has an understanding of a lot of different areas of the sport," said Davidson, president of the Columbus Blue Jackets and chairman of the Hall of Fame's selection committee. "He was obviously very, very competitive when he coached and when played and when he managed. But he's a guy that obviously wants to be around the game."

One of Quinn's more emotional moments in that job came when Sundin was elected in 2012.

"He called me and said, 'Mats, it's Pat Quinn, you're going to be elected into the Hockey Hall of Fame,'" Sundin recalled. "I think we were both crying at the time a little bit on the phone. We had some special moments together, and there was a lot of mutual respect."

Quinn came close but never got his name on the Stanley Cup. He also had failures, like the 2006 Canadian Olympic team that disappointed in Turin.

"The one thing I wish he would've won was a Stanley Cup, obviously," said former Penguins GM Ray Shero, whose father gave Quinn his start in coaching and went to training camp with him in Los Angeles. "Winning the gold medal for the Olympic team was fantastic and to see him a few years ago with the world junior team and how they great they did and how exciting that was in Ottawa, that was fantastic for him."

"Some people would measure their lives in the sports business by the trophies and the awards and the things they've won," McPhee said. "But I think the real men can be measured by the impact they had on peoples' lives and Pat Quinn had a tremendous impact on a lot of peoples' lives in terms of them being good players or good executives but even better people. Pat was one of the most phenomenal human beings I've ever known. A lot of us feel really, really lucky that we got to work for him."

Note to readers: This is a corrected story. An earlier version reported that no team has come closer to winning the Stanley Cup during Canada's current drought than the Canucks.