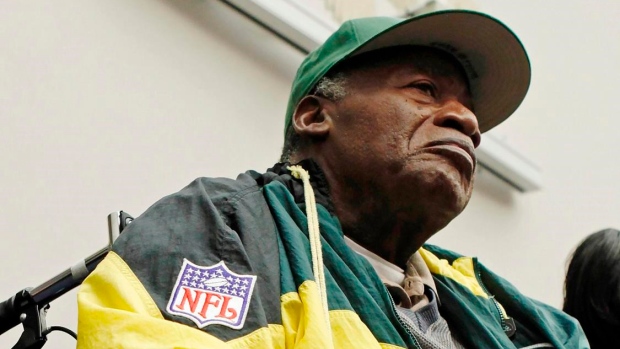 TORONTO — Dan Ferrone says he owes all of his CFL success to Willie Wood.

Wood, a former head coach of the Toronto Argonauts, died Monday of natural causes in Washington D.C. He was 83.

Wood lasted less than two years as Argos head coach, but one of his decisions was to start Ferrone as a rookie guard in the 1981 season. The native of Oakville, Ont., not only went on to play 12 pro seasons — 11 with Toronto — but won two Grey Cups and was a five-time CFL all-star before being inducted into the Canadian Football Hall of Fame in 2013.

"I owe everything to Willie Wood," Ferrone said. "He's the reason why I got to play professional football, enjoy Grey Cups and become a Hall of Famer.

"If it wasn't for him, I definitely would've had a whole different turn to my life."

Ferrone's football future became very cloudy when he left Simon Fraser midway through his senior season after butting heads with then head coach Rod Woodward. But Ferrone is forever grateful to Wood for taking a chance on him.

"I left Simon Fraser halfway through the season . . . and that's not a very good sign for any player regarding attitude or teamwork," Ferrone said. "So he (Wood) brings me in around February, introduces himself and is very kind and says, 'You know, the one thing I'm trying to do with this team is try to get rid of the bad apples and create a team with good work ethic.'

"So I went back to my wife, who was then my fiance, and said, 'I guess that's it, I'm not sure what's going to happen now.' But from the second practice he made me a starting left guard and left me there no matter how bad I was. From that day on, everything that happened for me was because of Willie Wood."

Wood garnered a reputation as a tough, dependable safety during his 12 stellar seasons with the Green Bay Packers (1960-71). Undrafted out of USC, Wood claimed All-NFL honours nine times and participated in the Pro Bowl on eight occasions.

The five-foot-10, 190-pound Wood registered 48 career interceptions for 699 yards and two TDs. He also returned 187 punts for 1,391 yards and two touchdowns. Following his retirement, Wood was inducted into the Packers Hall of Fame (1977) and Pro Football Hall of Fame (1989) and never missed a game over his illustrious career.

In 1990, Wood was chosen for the Super Bowl Silver Anniversary team. The flag at the Pro Hall of Fame in Canton, Ohio, will fly at half-staff in Wood's memory.

Wood became an assistant coach with Toronto under head coach Forrest Gregg, a former Packers teammate. When Gregg left after the '79 season to join the NFL's Cincinnati Bengals, Wood was promoted to the Argos' top job, becoming the CFL's first African-American head coach.

Wood was fired during the '81 season following Toronto's 0-10 start. He had an overall 6-20 coaching record with the Argos.

As great as Wood was as a football player, Ferrone said he was 100 times better as a person.

"He was a kind man, he treated us like gold," Ferrone said. "We had the best of everything.

"I never ate so well and we had the best of hotels."

However, Wood was anything but a soft touch.

"He worked our butts off," Ferrone said. "He made us do 100 up-downs before practice and how can you practise after that because you're so burnt out?

"We'd do live goal-line before games, it was incredible."

Today's pro football is vastly different. Players rarely hit now in practice or even wear pads, but Ferrone said Wood could succeed in that climate.

"It's an interesting question because in today's CFL or NFL, it's all about relationships with players," he said. "You're trying to create the ability to get free agents to make your team better and he would've achieved that."

Ferrone said Wood also had a keen eye for talent, especially Canadian. In 1983, 12 players from the '81 Argos squad remained, including Ferrone, when Toronto ended its 31-year Grey Cup drought beating the B.C. Lions 18-17 under then head coach Bob O'Billovich.

"He made trades, put a lot of time and effort in the draft. The No. 1 thing he picked up on as a coach, as smart as he was, was the success of a team really relied on how good your Canadian talent was."

Wood got into coaching in 1972, joining the NFL's San Diego Chargers as a defensive backs coach. After being hired as the defensive co-ordinator of the Philadelphia Bell of the World Football League in 1975, Wood became the first African-American head coach in pro football's modern era before the team's first regular-season game.

But the Bell's season lasted just 11 contests before the league folded.

After coaching, Wood returned to the Washington, D.C. area to run his own business. A city street there is named Willie Wood Way.

Wood had been confined to assisted living facilities for about the last 13 years. According to the Packers, he'd suffered from advanced stage dementia for nearly a decade.

Wood is survived by two sons and a daughter. His wife, Sheila, passed away in 1988.

The Associated Press contributed to this report.

This report by The Canadian Press was first published Feb. 4, 2020.