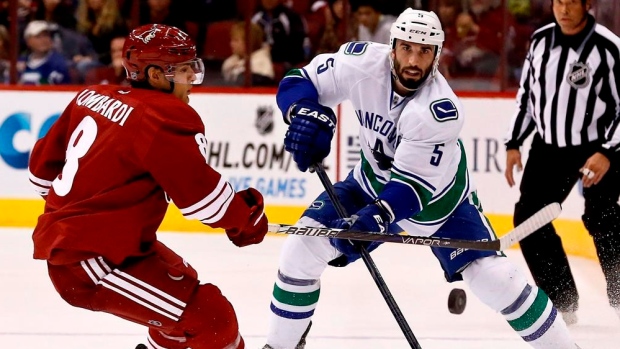 VANCOUVER — A former National Hockey League defenceman is suing his financial adviser claiming negligent advice led to investment decisions that cost far more than the multimillion-dollar salary he earned during a six-year contract with the Vancouver Canucks.

At the time, Garrison's claim says he was 28 years old, "risk averse," and had no experience with financial planning — conditions that the suit alleges Jones understood.

The statement of claim says Garrison was told the investments would produce more than $43 million in capital over 10 years but instead he lost money and is seeking damages, reimbursement of interest, an order voiding the life insurance policies and a return of all premiums.

None of the allegations has been proven in court, Jones has yet to file a response to the claim and when contacted by phone, he said he had no immediate comment.

Garrison, who is now 35 and playing hockey with Djurgardens of the Swedish Hockey League, claims Jones was aware that the six-year contract signed with the Canucks might be the last of Garrison's hockey career and that his qualifications for employment after hockey were limited.

The statement alleges Jones — a registered and licensed insurance agent and Certified Financial Planner —and his agency, Richard Jones Financial Group Ltd., failed to conduct a needs analysis, which would have determined Garrison did not require the insurance policies.

It also claims Jones did not produce a financial plan for Garrison and did not tell him that the final years of his contributions to the various investments were unbudgeted, meaning there was a likelihood they would be unaffordable.

Garrison alleges he was not informed about the true costs of insurance as an investment vehicle and that he was also sold policies funded in such as way that the future cost would be unaffordable "before the actuarial expected death of the plaintiff."

"The defendants promoted the sales of insurance policies as part of a sophisticated tax advantage investment strategy, yet the defendants had knowledge that the strategy was under review and that there was an intention by the federal government to reject the strategy," says the statement of claim.

The complicated tax strategy recommended to Garrison also required that he seek independent expertise from tax professionals, but the lawsuit says Garrison was never told about the requirement.

The statement of claim also lists BMO Life Assurance Company and IDC Worldsource Insurance Network Inc. as defendants, arguing they are required by law to supervise Jones and his agency in relation to the sale and management of insurance contracts.

"Had the defendants not breached these duties ... the plaintiff would not have suffered the losses alleged herein," says the claim. The statement doesn't say how much money Garrison is alleged to have lost.

No responses to the claim had been filed as of Nov. 13.

This report by The Canadian Press was first published Nov. 13, 2019