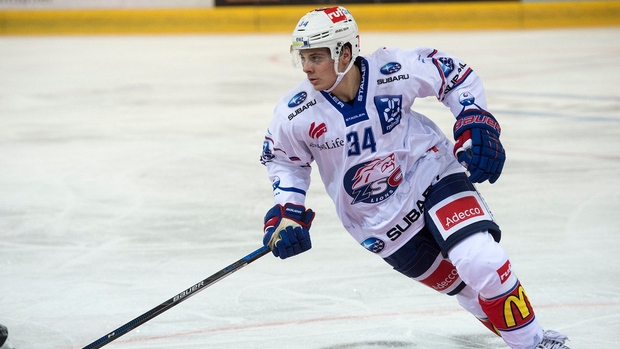 Get used to seeing Auston Matthews’ name at the top of this list all season long. An elite, complete centre, the young American will have his name called first at the 2016 NHL Draft.

Three dynamic forwards find themselves in the second to fourth spots this month. The two Finnish wingers, Jesse Puljujarvi and Patrik Laine are high-end offensive players who generate a significant amount of scoring chances and have the skill to complete them.

London Knights forward Matthew Tkachuk has all the elements of a top-end winger. The son of former NHLer Keith is able to play in all situations and is comfortable playing any style of game. Exceptional hockey sense and competitiveness, plus a high skill level, make him a player all NHL teams would like in their lineup.

Jakob Chychrun of the OHL’s Sarnia Sting rounds out the top five. A well-rounded defenceman, the 6-foot-2, 215-pound Chychrun might not have elite offensive ability, but he does have all the elements teams look for in a steady number two defenceman.

What would a draft ranking be without a smaller, skilled forward? Clayton Keller of USA Hockey's under-18 team is a very gifted player with excellent hockey sense, great hands, terrific quickness and an agility and elusiveness that makes it extremely difficult for opponents to check him.

He’s only 5-foot-9 and 168 pounds, but Keller’s on-ice vision allows him to see all his options and create scoring chances. He had seven goals and 12 points in four games to help the United States win the recent Five Nations Tournament in Switzerland.

As a centre - and I have a bias towards centres over wingers when it’s close - he may be the second-best player in the draft. I will allow some more time for evaluation, but he’s certainly right in the discussion.