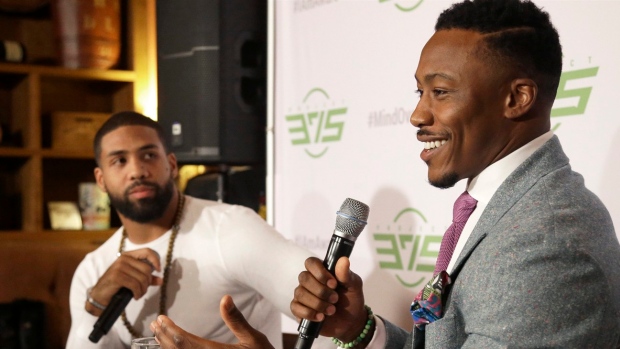 HOUSTON - Arian Foster was in a bad place, drinking heavily to self-medicate and deal with the problems in his life.

The Houston Texans running back knew he needed help but was reluctant to seek it because of the stigma surrounding mental health issues. He overcame that fear, sought therapy and it changed his life.

"It just got to a point where I just threw my hands in the air and I was like: 'This is going to kill me,'" Foster said. "So I went and got help and it was the best decision I ever made."

Now that he's embraced the benefits of counselling, Foster has joined the Jets' Brandon Marshall's PROJECT 375, a non-profit organization dedicated to eradicating the stigma surrounding mental illnesses and disorders. Foster is the first of what Marshall hopes will become a group of athletes, entertainers and business leaders who will talk openly about the issue as members of what he calls the organization's founders circle.

Marshall, a receiver for the New York Jets, was diagnosed with borderline personality disorder in 2011 when he sought treatment after off-the-field issues threatened to derail his NFL career. He and his wife, Michi, formed the organization and dedicated themselves to helping others with mental illnesses.

Doing this gave Marshall purpose and looking back he's so thankful he received his diagnosis and treatment when he did.

"I had a chance to lose my wife, possibly my career, and that would have been a lot, especially at the age of 27. I probably wouldn't have been able to cope and deal with that," Marshall said. "So I'm glad that we took the proper steps, did the work, and now we've went from patient to provider."

Foster and Marshall sat down for a deeply personal chat to mark the running back's partnership with PROJECT 375. Marshall asked the questions and Foster was open and shockingly candid.

Foster said he grew up in a home with domestic violence where there wasn't enough food at times. When he made it to the NFL, he found whole new set of problems related to money and whom to trust.

"It's just so much pressure and nobody tells you how to deal with it," Foster said.

He didn't see counselling as an option.

"I was drinking heavily. I was," he said. "I'm not proud of it. But it was something that helped me because it was numbing and what I found out, which was extremely powerful, was the emotions that you numb you can't be selective with. So everything that you numb that you're trying to numb you also numb everything good. So I was blocking out a lot of love"

He didn't hit rock bottom until his then-wife, Romina, made a life-changing decision.

"It was when my wife decided that we were going to get a divorce," he said. "This is extremely personal, but I was just not the best husband. I just wasn't. And that was because I didn't know how to be a husband. ... I was out there just trying to wing it."

His time in counselling helped Foster stop his destructive behaviour. But soon after he started to feel happy again, he tore a groin muscle in training camp. He says he was OK though, because of the mental work he'd put in.

He returned on Oct. 4 and was riding high. Happy on the football field, proud of the father he'd become and enjoying life overall. Just four games after his return came another blow; Foster tore his Achilles tendon and would miss the rest of the season.

"It's like ... man I can't catch a break," he said. "But I've done so much emotional work that it didn't really faze me either."

Foster's passion for this cause isn't only because of his struggles. He has another big reason for wanting to help.

"My sister is bipolar," Foster said.

"We didn't have money to get any kind of diagnosis so we just thought that she was an (jerk)," Foster said. "... It got to the point where I stopped talking to her because I couldn't deal with it, and I didn't know what she was going through. So we lost years of our life because we didn't know she was suffering from this disease."

Foster choked back tears as he spoke of his sister. He said she was living in government housing and using food stamps. She finally got help and is better now, which has allowed the two to repair their fractured relationship.

A condition of allowing Foster to share her story was that he include the happy ending.

"She said absolutely, but make sure that you tell them that it's a story of triumph," Foster said. "She takes the proper medicine and it's a struggle still, but every single day she fights it and she's on her way to get her master's (degree) now."

Marshall loves hearing people's stories because each one is valuable in starting to erase the stigma of discussing mental illness.

"The thing that is therapeutic ... is when I'm helping other people," Marshall said. "It's so freeing and rewarding. It also holds me accountable to continue to take the proper steps when I'm not feeling well, I'm having a bad day to ... use the tools and skills that I have to make sure I get back on track."

Foster writes poetry and songs, plays the piano and reads to keep centred.

"I'm on the brink of a career-ending injury according to pundits," he said. "I'm divorced. I'm supposed to be underneath the table drinking myself to death. But I've never been happier and it's because of the work I've put in and the want to change my life. I wouldn't change a thing man because that's what made me me. All these scars on my body, all these scars on my soul made me who I am and I like me."