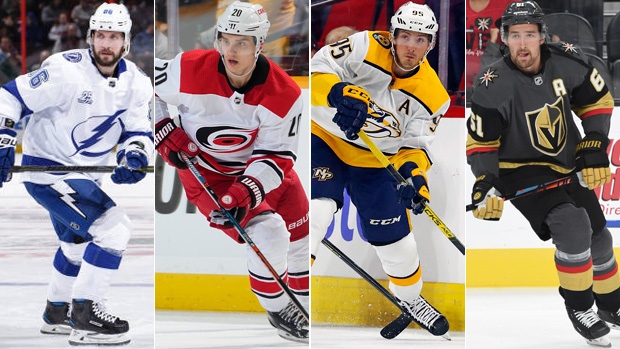 The National Hockey League returned to action on Wednesday night after a four-month hiatus, and outside of a very small number of markets already turning their attention to the 2020 NHL Draft (can’t imagine why), excitement is high for fan bases across North America.

One of the things I like to do right before the season begins is forecast the divisional winners. It’s a great exercise to get a feel for divisional strength and the expected hierarchy of teams based on prior performance and personnel changes, including both rosters and coaching staffs.

Three of the four divisional races went down to the wire last season, with only the Tampa Bay Lightning – the same Tampa Bay Lightning team unceremoniously swept by wild card Columbus in the first round – creating significant daylight between them and their competitors. The betting markets seem to think these races will remain competitive in 2019-20, and I tend to agree.

As for my picks? Let’s get started in the Atlantic:

Two things are true about Tampa Bay: their exit from the 2018-19 playoffs was as embarrassing as any series in recent history, and the competition at the top of the division – specifically from the Toronto Maple Leafs and Boston Bruins – is ferocious. You can make the argument that three of the best five teams by expected win totals reside in the Atlantic, in part because of the depth and talent in the respective lineups, and in part because the bottom of the division is absolutely brutal.

But even with two great teams around them, it’s hard to imagine they can close what ended up being a 21-point gap after game 82 of last season. The Lightning roster is deep, and their forward core – headlined by Nikita Kucherov, Steven Stamkos, and Brayden Point – is the most dangerous attacking unit in the league.

The part that makes opponents mad is that you really have to pick your poison with Tampa Bay. Their blitzkrieg-style offence has wreaked havoc on opposition defences for years now – both at even strength and with the man advantage. In fact, their grades in both last year are reminiscent of a Steph Curry interactive:

The scary part with Tampa Bay – as if the vast majority of last year’s offensive juggernaut returning wasn’t enough – is that this group has also become incredibly reliable on the defensive side of the ice. Part of this is tied to personnel, surely – the blueline is run by perhaps the best two-way defender in the league in Victor Hedman, and goaltender Andrei Vasilevskiy has evolved into one of the league’s best mistake erasers. At the end of last season, Tampa Bay was fifth in all situations goals allowed (2.6 per-60), and fourth in all situations expected goals against (2.6 per-60).

This team is an absolute juggernaut. The only interesting wrinkle here within the divisional race is that the Lightning will have to work to fight off the Maple Leafs and the Bruins. But from what we have seen last year and the trajectory of their core players, I just don’t think that fight will be all that hard.

For years, we watched the Carolina Hurricanes carry some of the most dominant puck-possession numbers in recent history. But it never materialized into much, because the Hurricanes could never get a save when they needed it.

One season later, a lot of people are seriously talking about Carolina winning their division. It’s amazing what even mediocre goaltending can do for a team that owns the run of play like Carolina does, and that’s just what Petr Mrazek (91.4 save percentage all situations) and Curtis McElhinney (91.2 save percentage) delivered in 2018-19. McElhinney has since departed to Tampa Bay, but the Hurricanes were able to land James Reimer via trade with Florida, further shoring up their crease.

So, why am I picking the team that finished fourth in the Metropolitan Division last year to win it this season? A bit of the reason is fading confidence in the legacy franchises in the division, though Washington was seriously considered for the top spot. More of it has to do with the masterful off-season the Hurricanes had.

Carolina recognizes they have two budding superstars in Andrei Svechnikov and Teuvo Teravainen, who have worked together to create a ferocious top line. But complementing these players is vital (here’s what happens when you don’t). The Hurricanes spent the summer adding scorers to blend into the rest of the lineup, including forwards Brock McGinn, Ryan Dzingel and Erik Haula, plus former Toronto Maple Leafs defenceman Jake Gardiner. And I would be remiss to not mention the Nino Niederreiter fleecing last January.

Think about the talent procured there, then think about the run-of-play advantages Carolina already had with a lineup that was among the youngest in the entire league: 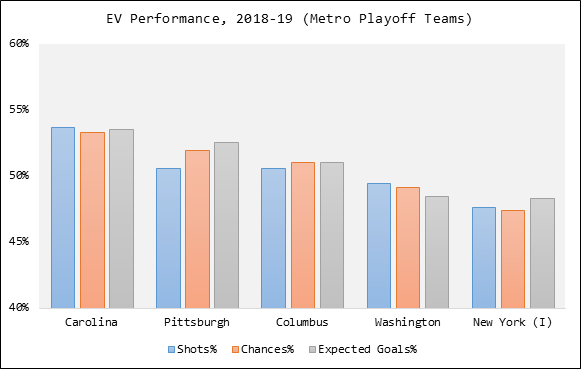 There is surely going to be some shuffling around within the division – Columbus looks great here for example, but their roster was abruptly gutted this off-season and it stands to reason they’ll trade off some of their standings points to upswing teams like the New Jersey Devils and New York Rangers. But it’s hard to figure how any team will materially eat into Carolina’s position in the standings, especially with how decisive a shot and scoring-chance advantage they have on a nightly basis.

I still have concerns about how much shooting talent is on this roster – for all that Carolina does when it comes to owning the puck, they give at least a portion of it back through their lack of finishing. The Hurricanes have scored on just 8.4 per cent of their shots over the last three seasons, which is third worst in the entire league. Some of this is because they strategically trade some volume for quality, and some of this was because of the personnel in place.

But the lineup is flush with talent, and the division – at least relative to where it was a few seasons ago – has weakened. It’s a huge opportunity for this upstart Carolina team, and I think they have a real shot at grabbing the top spot.

Of the four divisions, this was the most difficult decision. In fact, I had already started writing about why Dallas may have the upper hand of all seven teams and talked myself out of it.

Dallas’ relatively ineffective offence ultimately made the difference. The Stars were a brutal opponent last year, but that was largely because nothing got past goaltender Ben Bishop. As a group, the team averaged just 2.1 goals per-60 minutes at even strength (27th) and only marginally offset that with the league’s 11th best power play – a unit that converted on 21 per cent of its opportunities.

Dallas, to their credit, recognized they were a serious contender heading into 2019-20 and targeted some serious offensive weaponry, including two legacy Californian snipers in Joe Pavelski and Corey Perry.

But Nashville countered those moves by bringing in Matt Duchene to anchor the offence. The overhaul at the centre position in Nashville has certainly been something to watch over the years – consider where this team was to start the year a few seasons ago versus where they are now:

Those prior Nashville teams were extremely formidable, but the constant cry for more playmaking talent down the middle of the lineup surely resonated with the front office. The addition of Duchene into the lineup cannot be understated. For comparison’s sake, Evolving Hockey had Pavelski as a +1.1 Wins Above Replacement player based on his contributions across all game states, and Perry at -0.6 in his injury-shortened season. Duchene? For Ottawa and Columbus, he added +3.2 wins, which was 18th in the National Hockey League amongst regular forwards and ahead of names like Kucherov, Nathan MacKinnon and Artemi Panarin.

Adding Duchene to one of the league’s better even strength teams – the Predators were +0.4 goals better than their opponents for every 60 minutes of play, nearly triple that of the Stars in 2018-19 – will make this team even more dangerous. But it also should help with the one area that has killed the Predators for years, and that’s the power play.

If there’s one reason to stay awake at night over the Predators, it’s because of the man advantage. Nashville power plays – historically run in a three-forward, two-defencemen format – have been brutal for years, and last season’s 12.9 per cent conversion rate was comfortably dead last in the league. The team’s leading power-play goal scorers were Craig Smith, Filip Forsberg, and Kyle Turris with four. For a frame of reference here, Stamkos had 20 markers himself with Tampa Bay last season.

But with Nashville, I get an exceptional even strength team, a high-end penalty kill, and a goaltender in Pekka Rinne who is undergoing as impressive a mid-30s renaissance as I can recall. (And Juuse Saros is coming, too.) Counting on marginal improvement on the power play to couple with all of the team’s core strengths seems like the most sensible bet, and so on the thinnest of margins, I’m siding with Peter Laviolette’s club.

If there is one team in the Western Conference that could probably stand toe to toe with a team the calibre of the Tampa Bay Lightning, it’s the Vegas Golden Knights.

A lot of that has to do with their forward group – a forward group that was already impressive prior to acquiring superstar winger Mark Stone last season. Stone has become the new Patrice Bergeron, a player so elite defensively that the underlying numbers put him a notch or two above nearly everyone at his position. For what it is worth, Evolving Hockey’s Goals Above Replacement measure had Stone graded as the league’s most valuable contributor (+24.7) amongst wingers last season and second amongst all forwards behind Pittsburgh Penguins centre Sidney Crosby.

The Stone addition was also critical because it alleviated a lot of the scoring pressure that had fallen on the team’s top line of Jonathan Marchessault, Reilly Smith, and William Karlsson – a trio that struggled to put pucks in the back of the net during stretches of the 2018-19 season.

Either way, the team had an embarrassment of riches before acquiring one of the best wingers in the world. And yet looking at their pre/post performance, Stone clearly took the team to another level: 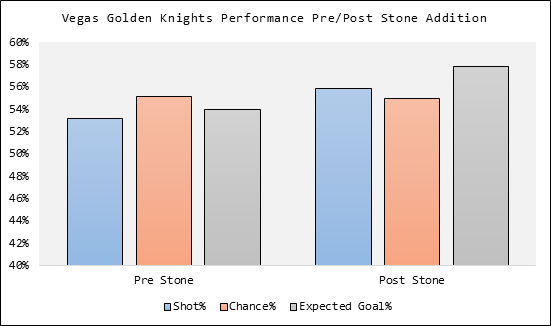 Any time you are getting 52 per cent or more of the shots (or scoring chances, or expected goals, or goals), you are consistently putting yourself in a position to win hockey games. Vegas has consistently met and exceeded that threshold for the first two seasons post-expansion, and everything we saw after the Stone trade suggests they’ll be even more formidable in 2019-20.

If you are looking for a weakness on this team, it’s probably on the blueline. The team moved Colin Miller this summer and has struggled to find productive second and third pairings for some time.

It does make for a beautiful irony within the division when you consider that San Jose – another legitimate contender in their own right – may carry the best blueline in the entire National Hockey League. Quite frankly, San Jose would have earned more consideration here if I wasn’t gravely worried about their goaltending situation, again.

To recap: Tampa Bay, Carolina, Nashville, and Vegas. Who said hockey couldn’t thrive in the south?