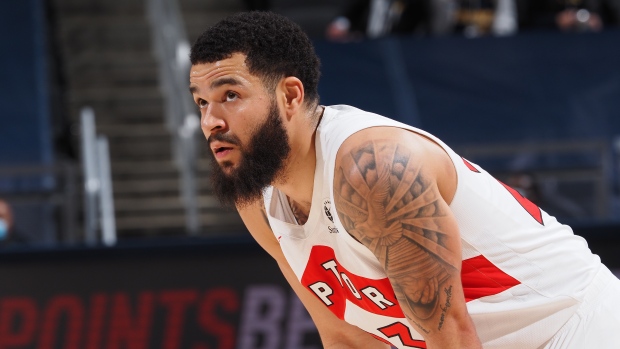 TORONTO – Admittedly, it had been a while since Fred VanVleet smiled as much or as big as he did before, during and after the Raptors’ Tuesday evening practice in Detroit.

VanVleet, four of his teammates – Pascal Siakam, OG Anunoby, Patrick McCaw and Malachi Flynn – and several members of Toronto’s coaching staff have spent more than two weeks in the NBA’s health and safety protocol. For privacy reasons, the team cannot disclose whether a player tested positive for COVID-19, though VanVleet confirmed that he is in fact recovering from the virus.

Earlier on Tuesday, all five players and most of the coaches were cleared to re-join the others and make the trip to Detroit, where the Raptors will face the Pistons on Wednesday night.

It remains to be seen who, or how many of those guys will return to the court – there are still hurdles to clear before the league can give them the green light for game action. But after an emotional stretch for the entire organization – particularly VanVleet and those who were away from the club – this was undoubtedly a positive step.

“Having that taken away from me for that period of time, where you just go cold turkey – you’re just in the room by yourself, you don’t get to practice, you don’t get to shoot on your own, I couldn’t do a push-up – and to be back here, I’ve been giving out more hugs in the last 24 hours than I ever have in my life. So I’m happy to be back to say the least.”

Tuesday’s session was a light one, focused primarily on easing guys back following a long layoff. For the first time in nearly a month, Nick Nurse was able to run scrimmages with three teams of five, instead of struggling to piece together two squads. VanVleet spoke to the media afterwards, and even stuck around late to answer a few additional questions – that’s how much he missed the daily grind.

During a season in which these kinds of absences have become so common they almost seem routine – more than 100 of the league’s 500 or so players have already missed time due to COVID-19 or its protocols – VanVleet provided some much-needed context to what goes on behind the scenes.

Not every player that battles the virus feels comfortable sharing their experience, which is completely understandable – it’s a personal matter and they’re each entitled to their privacy. But when somebody does make the decision to open up about what they’ve been through, or are still dealing with – as VanVleet did on Tuesday – it can go a long way.

Some people are still under the impression that because these are professional athletes – young men and women, most of them in peak physical condition – the virus is relatively harmless to them, that they can get it and miss a few games and come back like it never happened. That’s rarely the case.

“It was a whirlwind. Definitely an experience that I won’t forget. I wouldn’t wish it on anybody. I’m here, I’m alive, I’m breathing. I know there are a lot of people that didn’t make it through COVID. My thoughts and heart are with the families and people that have been affected by this thing that weren’t as fortunate as I was, as I am.”

From players like Minnesota’s Karl-Anthony Towns or Boston’s Jayson Tatum, who have spoken openly about their experiences with COVID-19, we also know that it doesn’t necessarily disappear once you test negative or are cleared to get back on the court. Tatum tested positive in January and is still feeling lingering effects months later.

“I think it messes with your breathing a little bit,” the Celtics’ all-star forward said last month. “I have experienced some games where, I don’t want to say [I was] struggling to breathe, but you get fatigued a lot quicker than normal.”

“Just running up and down the court a few times, it’s easier to get out of breath or tired a lot faster. I’ve noticed that since I had COVID. It’s just something I’m working on.”

It’s something that the Raptors will have to be mindful of as they get their guys back in the lineup over the coming days.

Siakam, McCaw and Flynn are listed as questionable for Wednesday’s game, while VanVleet is considered doubtful and Anunoby has already been ruled out. Given that they’ve been on different timelines, it stands to reason that their returns could be staggered.

A couple of them were cleared for individual on-court work over the weekend. Another two, including VanVleet, reached that step on Monday. Anunoby is a day or two behind. Still, assuming everything goes according to plan, all five players should be able to play by the end of the week, if not in Detroit then against Utah on Friday or in Cleveland on Sunday.

The Raptors are looking forward to having them back, to be sure. They need them back to make up some of the ground they lost in their absence – they’ve fallen to 11th in the East after dropping five straight contests. Still, it’s not like they can pencil VanVleet in for his usual 37 minutes per night, or throw Siakam out there for his 36, at least not initially.

“I think that it’s certainly an individual case-by-case basis, and whether you had [the virus] or not, there’s guys that have been out for a long time so it’s conditioning in general,” Nurse said. “General well being is at the forefront, and managing the minutes and making sure and asking the guys to be honest with themselves. If they need to come out, they need to come out. [And I need] to control it a little bit and not go too far with it even if they want to stay [in the game]. I think there’s a little bit of give and take there, too, but I think very cautious is where I’d put it.”

“It’s gonna be a process,” said VanVleet. “It’s gonna be a process, for sure. It’s gonna take time. I’m just taking baby steps. I’m just glad to be around the group. I just wanted to get my energy and confidence and swag around the group. I know it’s been a rough stretch for everybody, not just the guys that were locked up. The rest of the guys that were trying to put the pieces together, I feel for them. I just want to get back out there, hopefully sooner rather than later and start putting the pieces back together.”​