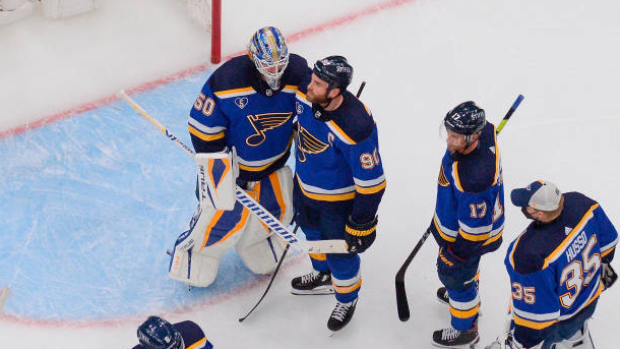 The Blues were swept in four games by the Colorado Avalanche in the first round of this year's playoffs, after being eliminated in six games in the opening round by the Vancouver Canucks last year.

Now two years removed from the team's first ever Stanley Cup championship in 2019, Armstrong said he sees at least two more years of the Blues being a contender.

"When we brought in the players a couple years ago, we thought we had a 5-year window (to win the Cup)," Armstrong said. "This was Year 3 of it.

Armstrong: "When we brought in the players a couple years ago, we thought we had a 5-year window (to win the Cup). This was Year 3 of it. I still think it’s open." #stlblues

The Blues finished fourth in the West Division this season, finishing 19 points back of the first-place Avalanche and second-place Vegas Golden Knights. The team was without star winger Vladimir Tarasenko for much of the season due to a shoulder injury and played their first-round series without leading scorer David Perron due to COVID protocols.

"Certainly injuries and COVID are going to play into my overall assessment of the year," Armstrong added. "The strength of this organization is the team, and we have to get back to being a better team."

Armstrong wouldn't commit to making significant changes on Wednesday, but left the door open to it.

"[With the Expansion Draft], I think it’s going to be an interesting summer (around the League)," Armstrong said. "Whether there’s a lot of change, time will tell."

According to CapFriendly, the Blues are slated to have $14.9 million in cap space this summer with 20 players under contract.