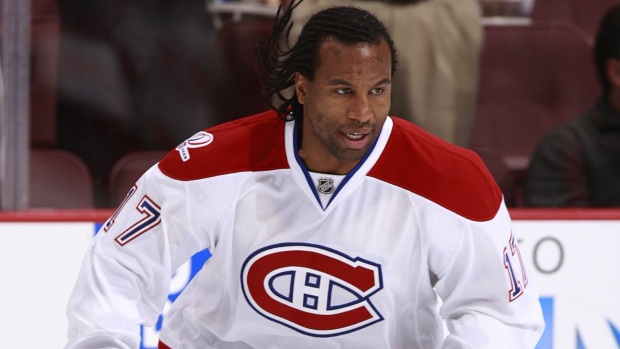 Long-time NHL veteran Georges Laraque arrived home from a Montreal-area hospital on Monday after spending the weekend recovering from COVID-19.

Laraque, who announced his diagnosis on Twitter last week, joined TSN’s John Lu via videoconference to discuss his experience with the pandemic.

"I was really struggling but just the fact that since yesterday I didn’t need extra oxygen to breathe it was really encouraging because you know, gasping for air is one of the worst feelings when you can’t breathe," he said.

"So I’m in a room [in the hospital] with three people, all infected, sitting there not knowing what’s going to happen. And just plugged to oxygen and waiting for my lungs to get better. I knew my life was not in danger, but still."

Laraque said he believes he contracted the coronavirus while picking up groceries for elderly people in the Montreal area since they’re the most at-risk demographic. Still, Laraque made it clear COVID-19 can sweep anyone off their feet, even healthy former athletes.

"Elderly people don’t want to go out of the house to get groceries so I volunteered for them and I did that for them because it was advised for them to stay at home. So I just took their list of groceries and went to a couple different grocery stores to pick up stuff for them. And when I did that, you know how contagious this thing is, you could be picking up a product, touch your face after and that’s it," he said.

"So it just shows you that you could pretty much get it anywhere and you just have to be really careful."

Despite a rough last few days, Laraque says an outpouring of support from the hockey community including Glen Sather, Craig MacTavish, Wayne and Janet Gretzky and Sidney Crosby helped him through difficult times.

"All the players pretty much. It was insane. It was so appreciative to get everybody calling, seeing how you’re doing."

Laraque thanked hospital staff over the weekend who have been taking care of him. He also told people not to feel too sorry for him because "I'm not the only one fighting this."

Laraque is a veteran of 12 NHL seasons mostly spent with the Edmonton Oilers. The 43-year-old also spent time with the Pittsburgh Penguins, Montreal Canadiens and Coyotes franchise.