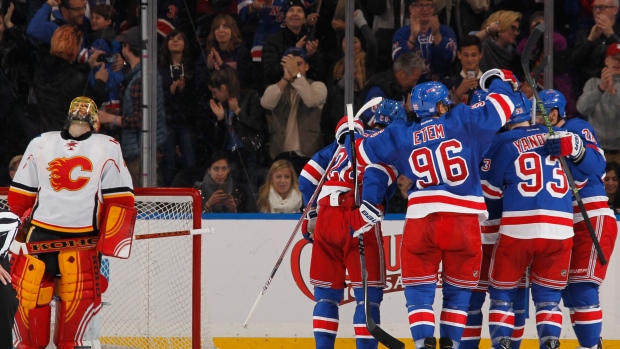 NEW YORK, N.Y. - The start of this season has not been seamless for Dan Girardi and the New York Rangers.

After 10 games, both the player and team hope their games are rounding into shape.

"It was our third game in four nights," Vigneault said. "We were able to find our rhythm in the second half of the game."

Oscar Lindberg, Kevin Klein and Derick Brassard also scored. The Rangers (6-2-2) have won three of their last five and earned points in all five games.

"Our record is really good," Girardi said. "But at the same time, we know in here that maybe one or two games we played a 60-minute game really hard. I think you need to find a way to get that 60-minute game."

Antti Raanta made 22 saves in New York's third of 17 back-to-back sets this season — it lost to the Flyers in a shootout Saturday night. The Rangers have won six of their past seven against the Flames.

In his 769th game with New York, Girardi scored his first this season to put the Rangers ahead 2-1 with 3:03 left in the second. Recently demoted to the third defence pairing with Keith Yandle, Girardi sneaked down to the right circle and snapped a rebound of Emerson Etem's shot past Jonas Hiller.

"It just popped right to my stick," Girardi said. "I just got it away as fast as I could. Luckily it went in."

Hiller stopped 17 of 21 shots before being replaced by Joni Ortio late in the third period. Ortio made five saves as Calgary fell to 2-6-0. The Flames have lost five of their last seven games.

"We've got to find a way to win," Matt Stajan said. "We're not scoring enough goals."

Girardi's goal was his 200th point in the NHL and Etem got his first point as a Ranger. In 10 games against Calgary, Girardi has three goals and five assists.

Girardi's goal came 4:54 after Lindberg made it 1-1 midway through the period with his fifth of the season. The rookie cut to the middle and tapped Kevin Hayes' no-look, behind-the-back pass into the net.

"There's no doubt he's found a way to be at the right place at the right time to get us some timely goals," Vigneault said of Lindberg. "That's pretty impressive. That goal definitely got us going. "

Calgary took a 1-0 lead 3:06 into the game on Hudler's third of the season. The sequence began with Marc Staal's turnover in the offensive zone, leading Sean Monahan and Johnny Gaudreau to counterattack up the ice. After he and Monahan gained the offensive zone, Gaudreau drove to the net. Raanta overcommitted, and Hudler tapped in a feed from Gaudreau.

Hudler's goal came 1:35 after the Rangers misfired on a golden opportunity to stake themselves to a quick lead. New York got two first-period power plays after penalties by Flames captain Mark Giordano, and during the first, Hayes missed an open net from the left circle with Hiller out of position.

New York did not score on either of its man advantages, but it also killed both of Calgary's first-period power plays. The Rangers have killed 17 straight penalties over their last six games.

"We couldn't get a go-ahead goal and the cushion on them," Flames coach Bob Hartley said. "I'd like to see (the Flames) rewarded because I thought we worked hard."

Klein and Brassard scored 1:48 apart midway through the third.

NOTES: Prior to the game, Vigneault said Viktor Stalberg was "feeling better, day to day," following a hit from Flyers defenceman Radko Gudas in the second period of Saturday's loss. When asked directly, neither Vigneault nor a team spokesperson characterized Stalberg's condition as a concussion. "It's a head injury," the spokesperson said. Gudas was not penalized on the play. ... Derek Grant made his season debut for Calgary after being called up from AHL Stockton. Grant skated on a line with Josh Jooris and Sam Bennett. ... Calgary general manager Brad Treliving said Michael Ferland is "week to week" with an MCL sprain. ... New York scratched defenceman Dylan McIlrath. The Flames scratched defenceman Jakub Nakladal and left wing Mason Raymond.