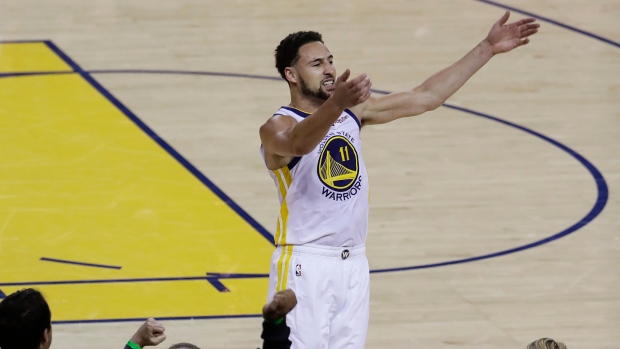 OAKLAND, Calif. -- The Golden State Warriors once again plan to take their resurrected "Strength in Numbers" approach up against a team that prides itself in its depth when the defending champs host the Portland Trail Blazers in Game 2 of the Western Conference Finals Thursday night.

Watch the game LIVE across the TSN Network and on TSN Direct at 8pm et/5pm pt.

Playing without injured Kevin Durant, the top-seeded Warriors got key contributions from several backups, including Quinn Cook, in a 116-94 victory over the Trail Blazers in Game 1 of the best-of-seven series Tuesday night.

The Warriors ranked 28th out of 30 teams in points off the bench during the regular season, and they were outscored by an average of 55.7-29.7 by Los Angeles Clippers backups in the first round. But they responded to Durant's calf injury in the Western semifinals with a greater commitment to the reserves in Game 6 at Houston.

Kevon Looney had 14 points and Shaun Livingston 11 as the Warriors dominated the Rockets 33-17 off the bench in a 118-113, series-clinching win.

Golden State coach Steve Kerr took the same approach in Game 1 against Portland, which prevailed over Denver in its Western semifinal in large part because of a 34.1-25.1 average advantage in bench points.

That confidence paid dividends in the series opener, with all eight Warriors backups who participated recording a positive plus/minus as Golden State's reserves outscored their Portland counterparts 36-28.

"This series feels like it's a series where we can play more people," Kerr explained after the win. "It's a different matchup, and I think that what you saw (Tuesday) is what we'd like to get to every night if we can, in terms of playing 10, 11 guys."

Kerr said he thought Game 1 was won in the first five minutes of the fourth quarter, after Portland had closed within 79-73.

That's when a unit of Klay Thompson and four reserves - Cook, Livingston, Jonas Jerebko and Jordan Bell - opened a double-digit advantage over a group of mostly Trail Blazers backups, with Thompson and Cook each contributing a pair of 3-pointers to the run.

While the Warriors, who will again be without Durant in Game 2, hope for more of the same, Trail Blazers coach Terry Stotts walked away from Game 1 shaking his head over his team's performance.

Just two days removed from a tense Game 7 win at Denver, the Trail Blazers shot poorly (36.1 per cent), committed an inordinate number of turnovers (21) and struggled to defend Stephen Curry on the perimeter (9-for-15 on 3-pointers).

While Stotts is confident his club can remedy all three of those issues, standout guard Damian Lillard noted a fourth shortcoming -- the combined 36 points he (19) and backcourt sidekick CJ McCollum (17) contributed on 11-for-31 shooting, including 3-for-10 on 3-pointers.

Lillard also had seven of his team's 21 turnovers.

"You can't allow that," he said of the turnovers, which the Warriors converted into 31 points. "If you allow that against this team, especially on the road, you're going to have a slim chance to win.

"We turn the ball over as much as we did, as much as I did, with how much I had the ball in my hands, you know, not valuing it enough, it's going to hurt you."