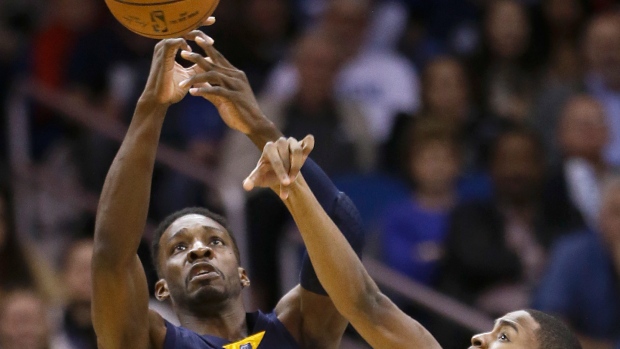 ORLANDO, Fla. - When Memphis parted with Tayshaun Prince and a future first-round pick to add Jeff Green in a three-team trade this week, the hope was it was getting an offensive upgrade at small forward.

In just his second game in a Grizzlies jersey, Green scored 12 of his 21 points in the fourth quarter to help Memphis hold off the Orlando Magic 106-96 on Friday night.

Zach Randolph added 18 points, and Marc Gasol had 12 points and 16 rebounds to help the Grizzlies win their third straight.

"He's learning how to play off other guys," Memphis coach Dave Joerger said of Green. "He's a good cutter, (coming) out of being a smart player and playing a good cutting system in college. That's kind of where he made his money tonight."

Memphis took an 11-point lead in the opening minutes of the final period. Orlando cut it to four points with just over a minute to play, but Green gave the Grizzlies some breathing room with back-to-back dunks.

Memphis played for the first time this season without starting point guard Mike Conley, who sat with a sprained right ankle. He watched from the bench wore a boot on his right foot. He said afterward the he likes what Green brings to the rotation.

"Adding a guy like Jeff just gives us that much more versatility," Conley said. "He can come off the bench and play three, play four, he's athletic, a lot of things we've been looking for in a player. He fills that void."

Elfrid Payton led the Magic with career highs of 22 points and 12 assists.

Payton and Victor Oladipo exploited Conley's absence and were able to get into the lane to create offence and push the tempo at times. Oladipo finished with 16 points, but was just 7 for 17 from the field.

The Grizzlies dominated in the paint throughout the night, outscoring the Magic 58-42 for the game.

The loss also kept Orlando from notching its first three-game winning streak of the season.

Grizzlies: With Conley sitting out, Gasol is the only Memphis players to appear in every game this season. ...Joerger picked up his fifth technical of the season in the third quarter.

Magic: F Tobias Harris missed his fourth straight game with a sprained left ankle. ...Magic coach Jacque Vaughn said rookie F Aaron Gordon (fractured left foot) has been cleared for practice, but remained on the inactive list Friday night. Vaughn said the timeline for his return remains fluid. He had surgery Nov. 21 and has missed 32 games. "I don't have a date for you," Vaughn said. "We always want to put guys back on the floor when they're comfortable. Once he gets back on the floor, we'll just be smart about his minutes."

Magic F Tobias Harris is being featured in this week's edition of NBA TV's "NBA Inside Stuff" in a segment about his grandfather, Lt. Col. John Mulzac, a member of the Tuskegee Airmen during World War II. In the segment, which is part of the NBA's celebration of Dr. Martin Luther King Jr. Day, Harris and his mother, Lisa Harris, discuss how they were both inspired by his experiences. "Such a great guy, and he's always given us knowledge about life and just about being the best that you can be," Harris says in the segment. "So as a kid growing up and being able to hear from him, and hear those types of lessons, it definitely made me the person that I am today."