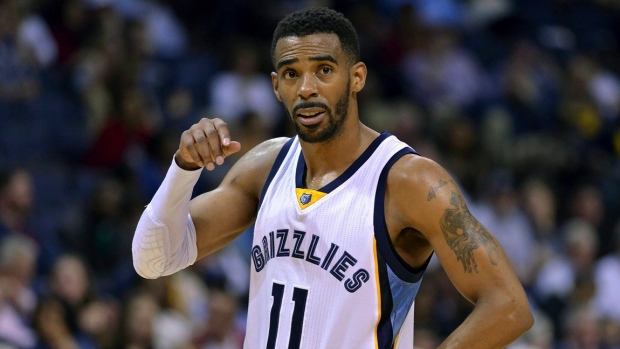 "I'm going to give it a go," Conley said after testing himself in pregame warmups. "I'm very excited."

Despite playing with a protective mask following surgery for broken bones in his face, Conley made his first four shots and seemed quite at ease for the Grizzlies.

Conley sustained multiple facial fractures in the first round against Portland. He was elbowed by CJ McCollum in Game 3 and had surgery April 27. He sat out the last two games against the Trail Blazers and the opening loss to the Warriors on Sunday despite taking part in warmups with the mask.

But after participating in a scrimmage for about 15 minutes on Monday and testing the mask again before the start of Game 2, Conley said he was ready to give it a shot with his team trailing the Western Conference semifinals 1-0.

But Conley was not hit in the face at all in practice so he is unsure how he will handle that if it happens in the game. He also said it may take some time to adjust to the mask in a game and running up and down the court after sitting out the past week and a half.

"It was a little challenging," Conley said. "The first time going up and down can be a little tough on everybody. I'll go out and do what I can do and see how my wind feels."

After being bothered by lights and sounds shortly after the injury, Conley said that is no longer a factor.

Grizzlies coach Dave Joerger said before warmups that Conley will start if can play and will be monitored throughout the game.

"Mike and I talk a lot in game anyway," Joerger said. "It will be how he's feeling. If I think either he's hurting us or does not look good, I will take him out. You don't know. It's clearly speculation at this point."

Conley was Memphis' third-leading scorer this season, averaging 15.8 points per game, along with a team-high 5.4 assists.

The Grizzlies have started Nick Calathes and brought Beno Udrih off the bench the past three games.