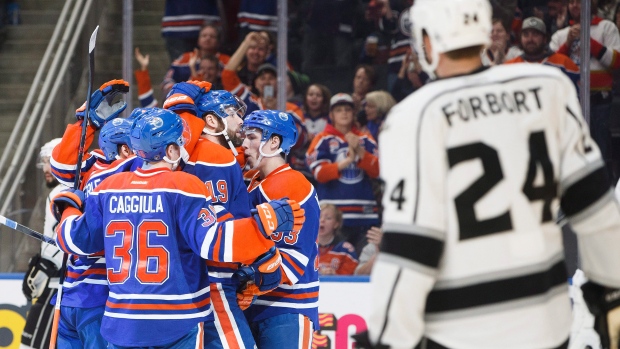 EDMONTON — Defenceman Eric Gryba picked the right time to record his first goal of the season.

Gryba scored the game winner and Jordan Eberle picked up a pair of assists as the Edmonton Oilers skated away with a rare 3-1 victory over the Los Angeles Kings on Thursday.

It was Gryba's first goal since Feb. 2, and just the sixth of his 236-game NHL career.

"It was just a lucky play. I took a swing at it and it went in," he said of swatting in his second-period go-ahead goal out of mid-air. "To come out and play like we did tonight, a real complete, honest game, shows some maturity and a lot of growth in this group."

Patrick Maroon and Ryan Nugent-Hopkins also scored for the Oilers (19-12-6), who have gone 4-0-1 in their last five outings.

It was the second of five meetings between the two teams this season, with the Kings winning the first one 4-2 in Los Angeles. The Kings swept the five-game set last year, and came into the game with a 17-1-2 record against Edmonton in their last 20 meetings.

"We talk a lot about these division games and what it means to where you end up in the standings," said Oilers forward and former King Milan Lucic.

"To be able to break a long streak against Arizona and another one here against another division team, that's huge for us. This is the fun time of the year, when games start meaning a lot more and we just have to go out there and keep playing like we did tonight."

"We played our asses off again tonight," said Kings head coach Darryl Sutter. "We got beat on the scoreboard, but we can't complain about much else.

"We played a hell of a hockey team in a tough building."

There was no scoring in the opening period, with Edmonton putting nine shots on Kings goalie Peter Budaj, and Los Angeles recording eight shots on Oiler Cam Talbot, who made his league-leading 33rd start, eventually picking up his 18th win.

Edmonton broke the deadlock 2:32 into the second period with a power-play marker, as Eberle fed it to Maroon at the side of the net and he completed a quick wrap-around to beat Budaj for his 11th of the season.

Maroon almost added another late in the second, but Budaj came across to make a point-blank stop.

The Kings tied it up three minutes into the third as Oilers forward Mark Letestu coughed up the puck to Shore, who then picked the top corner on Talbot.

The Oilers made it 2-1 four minutes later. Budaj made a great foot save on Eberle while sprawled on the ice, but Gryba swooped in to swat the rebound in out of the air.

Talbot made a huge save in the final minute on Devin Setoguchi to allow Nugent-Hopkins to score an empty-net goal to secure the victory.

Both teams will return to action on Saturday, as the Oilers play host to the Vancouver Canucks, while the Kings return home for their first game since Dec. 10, when they welcome the San Jose Sharks.