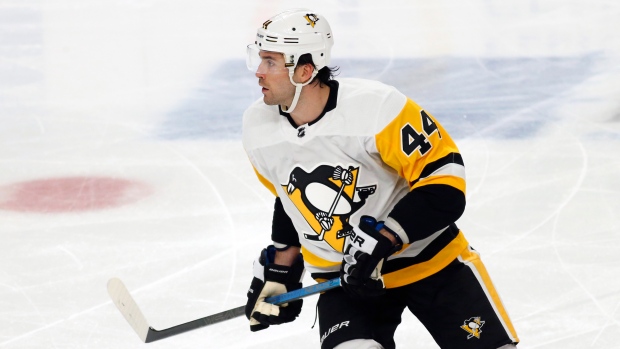 The Pittsburgh Penguins appear set to deploy Erik Gudbranson and Jack Johnson as a pairing when they open the regular season, pairing two players who have both drawn their fair share of criticism in recent years.

Despite outside doubts, Gudbranson believes the duo can be successful together in Pittsburgh.

Gudbranson, who was acquired by the Penguins last season from the Vancouver Canucks, posted two goals and 10 points in 76 games between the two teams. The third-overall pick in the 2010 NHL Draft, Gudbranson has topped 10 points in a season just once in his career, with the Florida Panthers in 2014-15.

Johnson, meanwhile, signed with the Penguins as a free agent last summer and posted one goal and 13 points in 82 games. The Penguins reportedly tried to move the 32-year-old in June to the Minnesota Wild, but the trade fell through when Phil Kessel refused to waive his no-trade clause.

“Jack’s a really good hockey player,” Gudbranson said. “He skates well; he’s a really strong, physical guy. And he’s always been a very cerebral defenceman. You can always make it work with a player like him.”

Both players noted their roles will continue to lean defensively and Johnson added he tunes out advanced statistics, which have not been in his favour.

The Athletic reports the Penguins are expected to pair Kris Letang with Brian Dumoulin, while Justin Schultz and Marcus Pettersson have paired together in training camp. Head coach Mike Sullivan, however, said the pairings remain in flux.

“We are going to explore different options,” Sullivan said. “A number of defencemen are in the mix. We have comfort levels with certain combinations. We’ll see how it goes. We don’t have any preconceived notions going into it.”