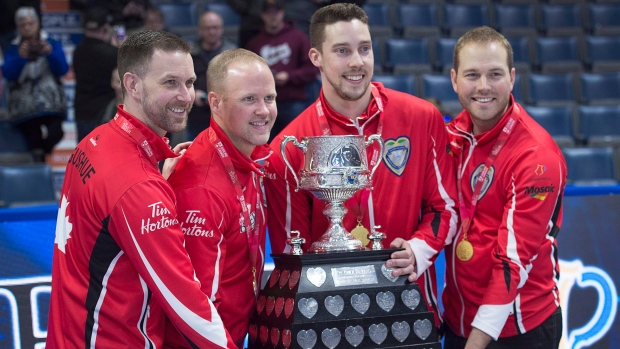 Up 5-4 coming home with hammer and an Alberta stone on the four-foot rings, Gushue drew the button with just his second draw of the entire game for the victory.

"Felt really good on the throw," the skip said. "Obviously Brett and Geoff sweeping that, you just can't throw heavy and they judged it to perfection."

Gushue won his first Brier in 2017 after 13 tries and a pair of runner-up results.

After near-misses for the championship, the pressure on him to win in his hometown of St. John's N.L., last year was immense.

"This week was so different than last year," Gushue said. "I don't ever want to say it was easy, but the fact we were playing so well, we felt so confident, so in control the whole week. We knew if we kept doing that, we'd give ourselves a chance and we did.

Gushue's team out of the Bally Hally Curling Club dropped only one game in the preliminary round — a 10-7 decision to Alberta — and carried an overall shooting percentage of 91 per cent heading into the final.

Curling Canada changed the format of the national men's and women's championships this year to accommodate 16 teams in each.

So the semifinal was played earlier Sunday, instead of its traditional Saturday. Bottcher beat Ontario's John Epping 6-4 to earn a showdown with Gushue.

Alberta got its first deuce of the final in the ninth, but was still down a point coming home without hammer. Gushue hit against two in the eighth end to lead 5-2.

After blanking the sixth, Bottcher's final draw of the seventh overcurled behind a long guard. Gushue had an open hit, so the Alberta skip drew against two stones and trailed 4-2.

An attempted guard by Alberta lead Karrick Martin slid into the rings in the fourth end, which helped Gushue force Bottcher to one. The Alberta skip ended up hitting against two for the single point and trailed 2-1.

With hammer to start the final, Gushue got his deuce after two blank ends.

A corner freeze by second Gallant and Alberta third Darren Moulding crashing on a guard let the defending champs set up for two in the third. Gushue had an open hit for two.

Gushue's win in the final was his 123rd all-time at the Brier. Earlier in the tournament, the 37-year-old passed Russ Howard and Martin tied at 113.

In a nod to history, the only other team from Newfoundland to win a Brier was Jack MacDuff in Regina in 1976.

Gallant, 28, has played second for Gushue for six years and 32-year-old Walker lead for seven.

The last Canadian team to repeat as men's world champions was Randy Ferbey in 2002 and 2003.

Canada didn't win an Olympic medal in team curling in Pyeongchang, South Korea, for the first time since the sport returned to the Winter Games in 1998.

So Gushue and 2014 Olympic champion Jennifer Jones, who will compete in the women's world championship in North Bay, Ont., starting Saturday, will try to restore Canada to the international podium this season.

Sunday's win was worth $62,000 to the Gushue team in prize money, cresting bonuses and athlete assistance funding.

The United States is hosting the men's championship for the first time since 2008 when it was in Grand Forks, N.D.

Shuster's team isn't competing in Las Vegas, however, as they chose to skip the national championship. The Americans will be represented by Greg Persinger.