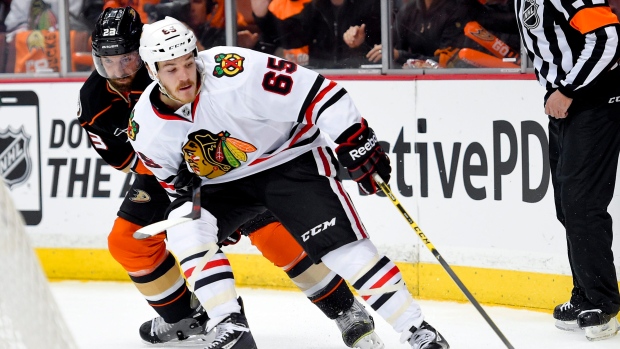 BUFFALO, N.Y. — Canadiens general manager Marc Bergevin wanted to add a winner to Montreal's lineup for next season. He believes he found it in forward Andrew Shaw.

The Canadiens acquired Shaw from the Chicago Blackhawks on Friday for a pair of second-round draft picks at the NHL draft.

"Five seasons in the NHL, two Stanley Cups. We talked a lot about helping our dressing room with character guys, guys that have won. It's one of the reasons why it was important for me to look for a player like Andrew Shaw," said Bergevin, who is already familiar with Shaw from his time spent in management with the Blackhawks organization.

"In Chicago, I was a part of the teams of scouts when we drafted him. We liked his character. He's a guy who knows what it takes to win, who has scored big goals in the playoffs. A player like Brendan Gallagher who takes his teammates with him into battle."

Montreal also traded forward Lars Eller to the Washington Capitals for second-round draft picks in 2017 and 2018.

The two draft selections sent to Chicago are the 39th and 45th overall picks at this year's draft.

Bergevin is confident that he can get a new contract worked out with Shaw. The two briefly talked Friday night after the trade was announced.

"He understands the situation, he loved Chicago, that's for sure. He loves Montreal and is excited to join the team," said Bergevin.

Chicago drafted Shaw in the fifth round of the 2011 NHL draft.

The Dane, who was acquired in a trade with the St. Louis Blues in 2010 for goaltender Jaroslav Halak, has two years left on his contract with a salary-cap hit of US$3.5 million.