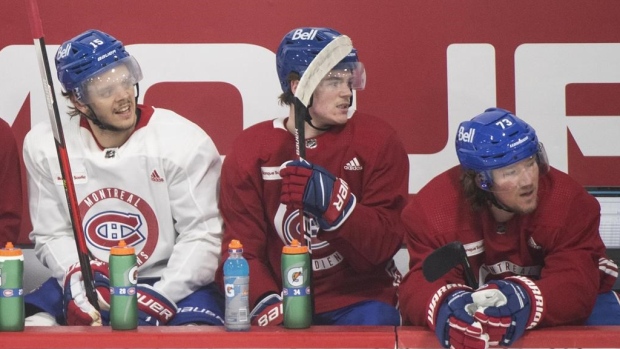 TORONTO — Jesperi Kotkaniemi and the Carolina Hurricanes putting pen to paper on a stunning offer sheet snapped the NHL from its late-summer slumber.

The bold move to pry the No. 3 pick at the 2018 NHL draft out of Montreal on a one-year, US$6.1-million contract in restricted free agency, coupled with the Canadiens' eventual decision to let the young centre walk, turned plenty of heads.

Count now-former teammate Tyler Toffoli among those who did a double take.

"I just thought the whole thing was bizarre," the 29-year-old Montreal winger said this week during the Canadian leg of the NHL/NHLPA media tour. "The whole situation was weird."

Montreal's decision not to match Carolina's offer resulted in the club receiving the Hurricanes' first- and third-round picks in 2022.

The 21-year-old Kotkaniemi failed to live up to expectations with the Canadiens — he was demoted to the minors in 2019-20 and put up just five goals and 20 points during the NHL's pandemic-truncated 2020-21 campaign — which made the Hurricanes' big-money plunge even more surprising.

Kotkaniemi, who still has plenty of upside, scored five times and added three assists in 19 playoff contests as the Canadiens made an improbable run to the Stanley Cup final. But he was a healthy scratch to open the first round and again in Games 4 and 5 of the title series before Montreal bowed out to the Tampa Bay Lightning.

"It is what it is ... you're not going to turn down $6 million," said Toffoli, who led his team with 28 goals and 44 points after signing a four-year, $17-million contract in free agency ahead of last season. "It's unfortunate, but we have to move forward."

Canadiens centre Nick Suzuki thought he and Kotkaniemi would be mainstays down the middle in Montreal for a decade or more.

"How the business works, I guess," said the 22-year-old, who overtook Kotkaniemi in the pecking order in 2020-21 with 41 points before chipping in 16 more during the playoffs. "There's so many moving parts in the league, it's tough to keep everyone together for a long period.

"The offer sheet's part of the business."

And there was, of course, added intrigue to a situation that appeared to border on personal between the two organizations after Montreal attempted a similar move for Carolina centre Sebastian Aho in the summer of 2019.

Carolina's initial announcement of the move for Kotkaniemi was posted in French on Twitter, and the team attributed the same quote from Montreal GM Marc Bergevin when he attempted to sign Aho to Hurricanes counterpart Don Waddell.

The trolling continued with Kotkaniemi receiving a signing bonus of $20 to match Aho's jersey number, while the $15 tacked on the end of the $6.1-million agreement represented the digits the Finn sported on his back in Montreal.

Toffoli gave the Hurricanes credit for at least one thing — making a splash.

"It got noticed by people who don't (follow) hockey," he said. "It's building the game.

"Everybody was talking about hockey for a week."

"(Bergevin) made a great move with adding Dvorak," Toffoli said. "I always thought he was hard to play against when I was with L.A.

Montreal will be minus captain Shea Weber (foot/ankle) this season — the veteran blue-liner's career could be over because of the injury — but Suzuki said it's his understanding goalie Carey Price (knee surgery) will be good to go when training camp opens next week.

The Canadiens also added help on the back end in free agency with the bruising David Savard, while Mathieu Perreault and Cedric Paquette were signed up front. And Jonathan Drouin is expected to return to the fold after leaving the team for personal reasons in late April.

"Definitely lost a couple pieces, but I think we added some great players," Suzuki said. "We're in a position to compete."

They'll just be doing it without Kotkaniemi, who's set make his first trip to the Bell Centre as a member of the Hurricanes on Oct. 21.

"I was happy for him," Suzuki added. "Tough offer to turn down, obviously. But tough seeing him go, (we) wish him the best.

"It'll be fun to play against him."

This report by The Canadian Press was first published Sept. 14, 2021.