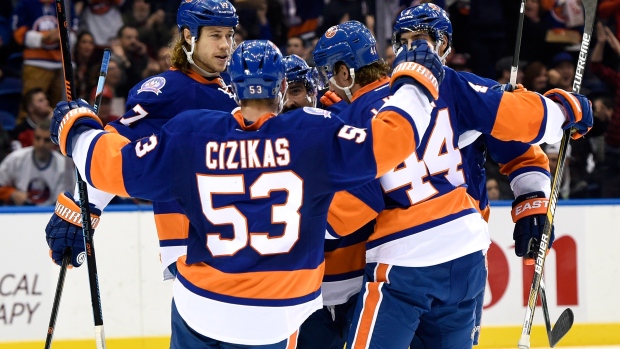 UNIONDALE, N.Y. - The New York Islanders are brimming with confidence these days, thanks to a standout goalie and a newfound winning attitude.

Jaroslav Halak made 34 saves for his ninth straight win, and Cal Clutterbuck scored his third goal of the season as the Islanders earned a 3-1 victory over the New Jersey Devils on Saturday night.

New York (17-7), which had a five-game winning streak snapped Friday at Washington, has won 12 of 14. This is the fastest the Islanders have gotten to 17 victories.

"We're doing some good things and we believe in ourselves," Islanders captain John Tavares said. "You can see the poise and composure we have now. We just have to keep that going."

Halak has been a force, going 12-4 in his first season with the Islanders.

"I'm not thinking of how many games I've won in the past," said Halak, who made 16 saves in a tense third period, including five during a 5-on-3 Devils' power play. "I'm only as good as my last game."

Islanders coach Jack Capuano knows how vital Halak has been to the team's success.

"I thought our goaltender was excellent," Capuano said. "We knew that they would make a push, and we did whatever we could to withstand it. We've had a long stretch — six games in nine days — and it showed tonight. But our goalie made the difference."

Casey Cizikas, who scored an empty-net goal to seal it, agreed with his coach.

"He's been unbelievable," Cizikas said. "He's kept us in games and he was such a huge part of the win."

The Devils (9-11-4), beaten by Detroit in a shootout on Friday, lost their fourth straight. Damien Brunner scored his first goal since Oct. 24, and Cory Schneider made 25 saves.

"We played better in the second and third periods, but we didn't get the result, and that's what matters," said Schneider, who started in goal for the 23rd time in New Jersey's 24 games. "We gave them everything we had down the stretch. Sometimes, you just don't get the bounce to tie things up.

"We played well, but it's a results-based business, and we're not getting the results."

New York took a 2-1 lead 3:32 into the second period when defenceman Calvin de Haan fired a wrist shot that was deflected in by Clutterbuck's stick.

The goal was originally given to de Haan but was changed to Clutterbuck during the second intermission.

The Islanders controlled play early, and they grabbed a 1-0 lead on Nikolay Kulemin's fifth goal.

Kyle Okposo took a slap shot that Schneider easily stopped, but he was unaware that the puck trickled through his pads and was inches from the goal line.

Kulemin got behind the defence and poked the puck past Schneider.

The Devils tied it 1:47 later on Brunner's second of the season. Defenceman Adam Larsson fired a shot that was deflected in front by Brunner.

"It was a good deflection and got me to the far side," Halak said. "There's not much you can do about that."

New Jersey dominated the third period, and held a 16-2 edge in shots, but couldn't net the tying goal.

With nine minutes left, the Devils recorded five straight shots at Halak. The best chance came on a backhanded attempt by Michael Ryder.

New Jersey then had a 5-on-3 advantage for nearly a minute toward the end of regulation, but the Islanders killed it.

Capuano said that is a sign of his team's maturity.

"When we had to contain, we did," Capuano said. "We have a different attitude, and it showed. From top to bottom, we know we're not going to lose."

NOTES: The Islanders honoured Hall of Fame defenceman Denis Potvin before the game. ... The Devils played without centres Adam Henrique (upper body) and Travis Zajac (lower body). Both were injured in the third period Friday. Brunner and Jordin Tootoo replaced them in the lineup. ... Devils D Eric Gelinas was a healthy scratch. The Islanders were without D Johnny Boychuk (upper body) for a second straight game. ... Islanders D Nick Leddy played in his 275th consecutive game. ... Capuano and Devils coach Pete DeBoer were teammates with Milwaukee of the IHL from 1989-91.