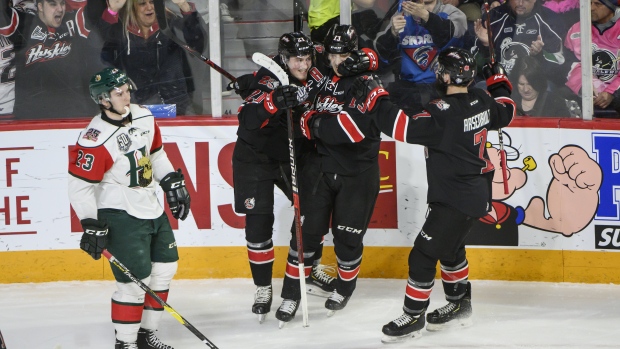 HALIFAX — Not every victory brings joy. At least in a four-team, round-robin tournament.

Jakub Lauko scored the winner with 54 seconds to go in regulation as the Rouyn-Noranda Huskies beat the Halifax Mooseheads 4-3 on Wednesday in the final preliminary game of the Memorial Cup.

Despite the Huskies pulling out the win, it'll be the Mooseheads heading directly to the championship game, while Rouyn-Noranda has to settle for a semifinal matchup Friday with the Guelph Storm.

"It's strange winning and not being happy, it's tough to explain," said Huskies coach Mario Pouliot.

Any one of Halifax, Rouyn-Noranda or Guelph could have earned a berth in Sunday's tournament final based on Wednesday's outcome. All three clubs finished with 2-1 records, but the Mooseheads got the tiebreaker through a drawn-out mathematical formula.

All Halifax needed to do to advance was win outright or lose by one goal up to 4-3. Rouyn-Noranda had to win 4-0, or by five or more goals to move on, while the Storm still had a chance if the game finished by any other score.

"Knowing what everybody knows, obviously I hope I never have to go through that again. It's really not easy," said Mooseheads coach Eric Veilleux.

The Mooseheads players left their phones in Veilleux's office Wednesday morning to avoid social media so that all the potential scenarios didn't creep into their heads before the puck even dropped.

"I give credit to our players for trusting the coaching staff," said Veilleux. "It says a lot about what type of individuals we deal with."

Veilleux prepared his team in usual fashion, to win the game, but with eight minutes to go in the third period while tied 3-3 and the Huskies pushing, he explained to them on the bench that a 4-3 loss was still enough to reach the championship.

"We kind of knew the circumstances and just knew we had to have a solid third period," said Mooseheads defenceman Patrick Kyte. "Even though we didn't win we got the job done."

Wednesday's game was a rematch of the QMJHL final that Rouyn-Noranda took in six games, and there was no love lost between the two clubs.

While the majority of the 10,004 fans on hand at Scotiabank Centre were pro-Mooseheads, the Huskies had an entire section of travelling fans in the building to show their support.

Bibeau opened the scoring for the Huskies with 5:22 to go in the first. The play was reviewed for offside but the goal stood after video showed the puck never left the Halifax zone.

Halifax hadn't trailed once in the tournament until Bibeau's marker, but quickly found itself down 2-0 off a turnover.

Peter Abbandonato stole the puck deep in the Mooseheads zone and set up Teasdale only 1:12 later. This one would also stand after going to a lengthy video review for offside.

Halifax came out strong to start the second, and scored three times to for a 3-2 lead after 40 minutes.

Groulx cut his team's deficit in half just 48 seconds into the period, then Durandeau tied the game at 7:34.

Things started to heat up with both teams taking extra hacks at each other when possible. Many plays went uncalled until Bibeau appeared to kick Samuel Asselin in the head when the Mooseheads forward was down on the ice, leading to an unsportsmanlike conduct minor.

Halifax forward Joel Bishop needed to be looked at by a team trainer and went to the dressing room in pain after he was taken into the endboards by Samuel Regis, who went to the box for boarding at 18:28.

Rouyn-Noranda carried all the momentum in the third and Rouleau tied the game with a wrist shot up top on Gravel with 9:47 to play to make things interesting.

"After a tough first game (5-2 loss to Guelph), we got better," said Pouliot. "Now we have to look forward and be well prepared for the semifinal."

Note to readers: This is a corrected story. An original story said the semifinal was Saturday