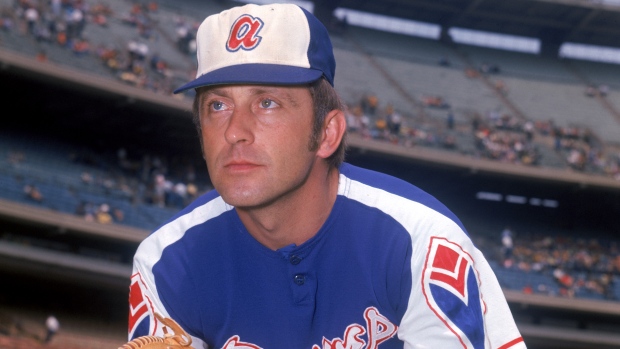 Heck, he didn’t even know where it was going most of the time.

But the knuckleball carried Niekro to more than 300 wins, earned him a spot in the Baseball Hall of Fame and gave him a nickname that stuck for the rest of his life.

The longtime stalwart of the Atlanta Braves rotation died after a lengthy fight with cancer, the team announced Sunday. He was 81.

The Braves said Niekro died Saturday night in his sleep. He lived in the Atlanta suburb of Flowery Branch, where a main thoroughfare bears his name.

He was the seventh Hall of Famer to die this year, the most sitting members to pass away in a calendar year, according to spokesman Jon Shestakofsky. The others were Lou Brock, Whitey Ford, Bob Gibson, Al Kaline, Joe Morgan and Tom Seaver

“These names, and these men, will be remembered forever in Cooperstown,” Shestakofsky said.

Niekro won 318 games over his 24-year career, which finally ended in 1987 at age 48 after he made one final start for the Braves. The right-hander was a five-time All-Star who had three 20-win seasons with Atlanta.

Dale Murphy, who won two straight NL MVP awards as a teammate of Niekro's, was among those who mourned his death.

“Knucksie was one of a kind,” Murphy wrote on Twitter. “Friend, teammate, father and husband. Our hearts go out to Nancy Niekro, the kids and grandkids. So thankful for our memories and time together. We’ll miss you, Knucksie.”

“An amazing pitcher but an even better man!” Freeman said on Twitter. “Thanks you Phil for all the laughs and wonderful memories over the years.”

Incredibly, he had 121 wins after his 40th birthday.

“We are heartbroken on the passing of our treasured friend,” the Braves said in a statement. “Knucksie was woven into the Braves fabric, first in Milwaukee and then in Atlanta. Phil baffled batters on the field and later was always the first to join in our community activities. It was during those community and fan activities where he would communicate with fans as if they were long lost friends.”

A statue of Niekro delivering his trademark pitch is located outside of Truist Park, the Braves' stadium.

Niekro didn't make it to the big leagues until 1964, when he pitched 10 games in relief for the then-Milwaukee Braves. He made only one start over his first three years in the big leagues but finally blossomed as a starter in 1967 — the Braves' second year in Atlanta — when he went 11-9 and led the National League with a 1.87 ERA.

With a fluttering knuckleball that required catchers to wear an oversized mitt, Niekro went 23-13 as the Braves won the first NL West title in 1969. He was runner-up to Seaver for the Cy Young Award, the closest he ever came to capturing pitching's premier prize though he finished in the top six of the balloting four other times.

Niekro also had 20-win seasons in 1974 and 1979, despite pitching for a team that fell on hard times after its appearance in the inaugural NL Championship Series, where the Braves were swept in three games by New York's Amazin' Mets.

Niekro also led the league in losses for four straight seasons, losing 20 games in both 1977 and '79.

His younger brother, Joe, also had a long baseball career with an arsenal that included the knuckleball. He won 221 games over 22 years in the big leagues, making the Niekros baseball's winningest set of siblings, with a total of 539 victories, just ahead of Gaylord and Jim Perry.

Phil Niekro pitched a no-hitter in 1973 but his most memorable game with the Braves came in 1982, when the team started the season with 13 consecutive wins and improbably won the NL West title by a single game to send Niekro to the playoffs for only the second time in his career.

On the final weekend of the season, the 43-year-old Niekro pitched a three-hit shutout and hit a two-run, eighth-inning homer that led Atlanta to a crucial 4-0 victory over the San Diego Padres.

Niekro finished 17-4 with a 3.61 ERA in 35 starts, but he didn’t get a decision in his only start of the NL Championship Series against the St. Louis Cardinals as the Braves were again swept in three straight games. He never made it to the World Series.

Niekro picked up his 300th win in 1985 while pitching for the Yankees. He reached the milestone by shutting out the Blue Jays 8-0.

Philip Henry Niekro was born in Blaine, Ohio, and learned the knuckleball from his father, who played for a coal-mining team in eastern Ohio.

“He was a very good pitcher,” Niekro told ESPN in an interview after his playing days were over. “He hurt his arm one spring, didn’t warm up good enough, couldn’t throw a fastball anymore. Another coal miner taught him how to throw the knuckleball.”

The elder Niekro passed it on to his son, who learned to grip the ball with his fingernails on the seams. That kept the ball from spinning, causing it to move in all sorts of confounding ways on its way to the plate.

“He threw it to me one day.” Niekro said of his father. “I asked him what it was. He showed me how to hold it. Didn’t know what it was, didn’t know anything about it except that I liked it.

“I never knew how to throw a fastball, never learned how to throw a curveball, a slider, split-finger, whatever they’re throwing nowadays. I was a one-pitch pitcher.”

In his 300th victory, Niekro said he didn't throw a knuckleball until the final batter, using it to strike out former teammate Jeff Burroughs to end the game. At the time, Knucksie was the oldest pitcher in baseball history to toss a shutout, a mark since broken by Jamie Moyer.

?I always wanted to pitch a whole game without throwing knuckleballs because people thought I couldn’t get people out without throwing them,? Niekro said afterward, with brother Joe sitting alongside him in Toronto.

After going 11-10 with a 3.97 ERA in 1983, Niekro had an acrimonious split from the Braves, who wanted him to retire so they could focus on their younger pitchers.

But Niekro was far from done. He won 16 games each of the next two seasons with the Yankees and even made the All-Star Game for the final time. He picked up 11 more wins with Cleveland in 1986 before his knuckler finally ran out of steam.

Niekro started 1987 with the Indians and was traded to Toronto in August, only to be let go by the Blue Jays after getting roughed up in three starts. He decided to retire but only after returning to Atlanta to make his final start in a Braves uniform.

Niekro lasted just three-plus innings, giving up six hits, six walks and five runs before he left the mound for the final time to a raucous ovation from the crowd at Atlanta-Fulton County Stadium.

While the knuckler was his trademark, Niekro was an all-around athlete. He won five Gold Glove awards and was a decent hitter for a pitcher, wracking up seven homers and 109 RBIs.

Niekro remained active in the Braves organization after his retirement, taking part in alumni activities and often serving as a special instructor at spring training. He managed Atlanta's Triple-A farm team for one season, but struggled in the role. He also guided the Colorado Silver Bullets, a barnstorming women's baseball team sponsored by Coors.

Niekro is survived by his wife, Nancy, sons Philip, John and Michael, and two grandchildren, Chase and Emma.

Longevity was the hallmark of Niekro's career, which was spent largely in obscurity pitching for Braves teams that rarely managed a winning season.

The knuckleball put little stress on his right arm, so he made at least 30 starts every season from 1968-86 — excluding the strike-shortened 1981 campaign — and finished with 245 complete games in his career.

He was even able to make infrequent relief appearances, earning 29 saves.

He remains the last pitcher to both win and lose 20 games in a season.

In this era where teams value velocity above all other traits, the knuckleball has essentially become extinct.

“There’s nobody around who can teach how to throw a knuckleball,” Niekro said in the ESPN interview. "There’s very few pitching coaches that I worked with that actually came out on the mound and told me what I was doing wrong with the knuckleball. Because they just didn’t know.