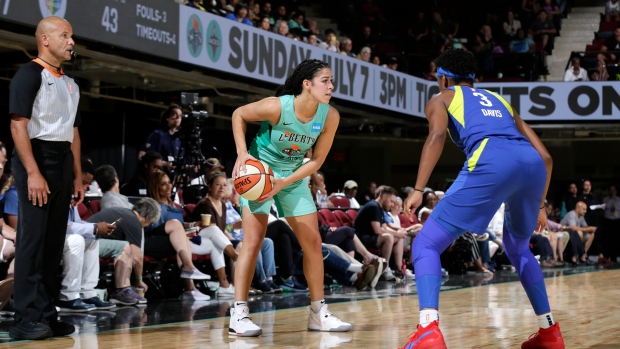 Kia Nurse is an All-Star for the first time in her young career.

The New York Liberty guard and Hamilton, Ont. native was one of four guards named on Thursday as starters in the 2019 WNBA All-Star Game.

This season's All-Stars were decided by fan and player voting, as well as media input.

The 23-year-old Nurse joins Chelsea Gray of the Los Angeles Sparks, the Seattle Storm's Jewell Loyd and Kayla McBride of the Las Vegas Aces in the backcourt.

Washington Mystics forward Elena Delle Donne and A'ja Wilson of the Aces were named captains and each will lead two teams of 11.

The two captains will be joined in the frontcourt by the Aces' Liz Cambage, Brittney Griner of the Phoenix Mercury, the Storm's Natasha Howard and the Connecticut Sun's Jonquel Jones. For Delle Donne and Griner, this is the sixth time they each have been named All-Stars.

All-Star reserves, as selected by the league's head coaches, will be announced on Monday.