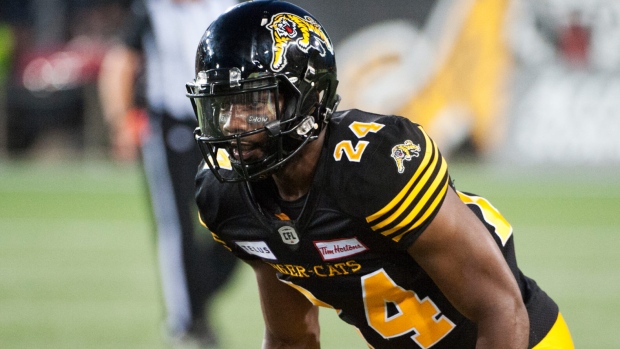 TORONTO — Don't expect to see Delvin Breaux playing for the Hamilton Tiger-Cats if the CFL stages a shortened season.

The all-star cornerback said in a story on theparkjournal.com that he won't play in an abbreviated 2020 campaign.

"COVID-19 has opened my eyes to life after football," Breaux wrote. "If we have a season starting tomorrow in Canada, you won't find me there.

"I have too many great things going for me to play for 33 per cent of my salary . . . my life is important and I haven't been thinking of football."

Breaux becomes the second high-profile Ticats star to say he won't play this year. Receiver Brandon Banks, the CFL's outstanding player in 2019, tweeted in July he wouldn't be suiting up in 2020.

Still, an abbreviated CFL season remains a possibility. The league remains in discussions with the Public Health Agency of Canada regarding its health-and-safety protocols for a shortened campaign, the biggest requirement of its request last week for a $30-million, interest-free loan from Ottawa.

If football is played, it will be in Winnipeg, the league's tentative hub city. Approval from the Public Health Agency of Canada is essential to the CFL's request.

Without it, there's no federal money for the CFL, and, essentially, no season. Last month, the Canadian government rejected the Toronto Blue Jays' plan to play home games at Rogers Centre over fears of spreading the novel coronavirus.

The Blue Jays ultimately settled upon playing their home contests in nearby Buffalo, N.Y. But the NHL has resumed play with Edmonton and Toronto as its hub cities.

Two sources with knowledge of the situation told The Canadian Press on Tuesday there's a general optimism regarding the CFL's request. One said the questions being asked of the league by the federal agency are for understanding and not with the intention of shutting things down.

The other added even if the Public Health Agency of Canada turns down the CFL's protocols, the league can continue to amend them until they meet the national agency's standards. That, in turn, would keep the league in line for financial assistance from the federal government.

But in order to hold a shortened season the CFL must reach an agreement with the CFL Players' Association on an amended collective bargaining agreement. And so far that hasn't happened.

The CFL must also finalize a deal with broadcast partner TSN.

The sources spoke on the condition of anonymity as neither the league nor federal government have divulged details of the loan request.

On Friday, Dr. Howard Njoo, Canada's Deputy Chief Public Health Officer, was very positive about the CFL's proposed measures. He wasn't available for comment Tuesday but the Public Health Agency of Canada said in a statement it remains in discussions with the league.

"The Government of Canada’s priority is to protect the health and safety of Canadians," it said. "The resumption of professional sports in Canada must be undertaken in adherence to Canada’s plan to mitigate the importation and spread of COVID-19.

"The Public Health Agency of Canada has received, and is currently assessing, a restart plan from the Canadian Football League (CFL)."

The league has maintained it requires government funding in order to stage an abbreviated season. The CFL's request for a $30-million loan was a reduction from the $44-million amended requisition it presented.

In April, the CFL approached the federal government for up to $150 million in assistance due to the COVID-19 pandemic.

If CFL games are staged this year, players would be required to isolate for 14 days at home before coming to Winnipeg. Upon their arrival in the Manitoba capital, players would self-isolate for another seven days.

Dr. Brent Roussin, Manitoba's chief public health officer, has said players will be tested for COVID-19 in their own jurisdictions. Then they'll be tested on their first day, sixth day, and 13th day in Winnipeg.

The general public will not be allowed inside dedicated CFL host hotels or IG Field. Only players, staff, league officials and media can enter the stadium.

Violations will result in strict penalties, including players being sent home for the remainder of the season.

A shortened campaign would see CFL teams playing six regular-season games apiece — a third of the usual number. The general sentiment is the league would adopt a one-division setup rather than the traditional East-West format.

The top-eight teams would make the playoffs. The last two squads would meet in the Grey Cup game, which would be played in Winnipeg.

CFL commissioner Randy Ambrosie has stated the earliest an abbreviated season could begin is early next month. But he's also said a cancelled campaign remains a possibility.

This is essentially the league's last-ditch effort to secure financial support from the federal government for an abbreviated '20 season.

This report by The Canadian Press was first published Aug. 11, 2020.