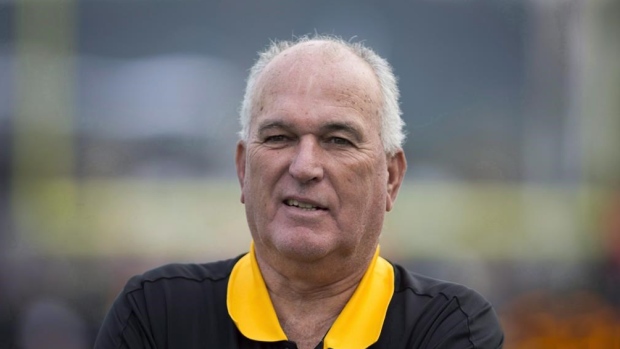 The Hamilton Tiger-Cats announced June Jones is leaving the team while Tommy Condell has been promoted to offensive coordinator.

TSN Football Insider Dave Naylor confirmed a Houston Chronicle report that Jones, who was serving as the Ticats OC, is leaving to become head coach of the XFL's Houston franchise.

Condell, who coached with the Ticats under Kent Austin, re-joined the team this off-season as wide receivers coach. The 46-year-old spent the past two seasons with the Toronto Argonauts, serving as offensive coordinator in 2018. Prior to the joining the Argonauts staff, Condell served as OC and receivers coach in Hamilton from 2013-15.

“Coach Condell has a proven track record as an offensive coordinator in the Canadian Football League and here in Hamilton,” Ticats head coach Orlondo Steinauer said in a team release. “We will certainly miss Coach June but we feel great about Tommy leading our offence moving forward.”

Naylor added the Ticats knew there was a chance they would lose Jones from their coaching staff this off-season, and while the late timing was a bit of a surprise, they expected Condell to be the team's offensive coordinator in 2020.

Hearing the @Ticats knew there was a chance they would lose @CoachJuneJones this off-season to a job in the states. Timing so late and close to camp a bit of a surprise. But they expected @TommyCondell to be OC in 2020. So the calendar moves up a year on that. #CFL #Ticats

Jones was the Tiger-Cats head coach last season, leading them to an 8-10 record, but stepped down into an associate head coach and offensive coordinator role this off-season, making way for Steinauer to be named head coach.

“June is pursuing another opportunity in professional football,” said Steinauer. “We appreciate all of his tireless work with the Tiger-Cats as he leaves the team in a much better position than when he arrived. We are all extremely happy for Coach June and wish him nothing but success in his new role.”