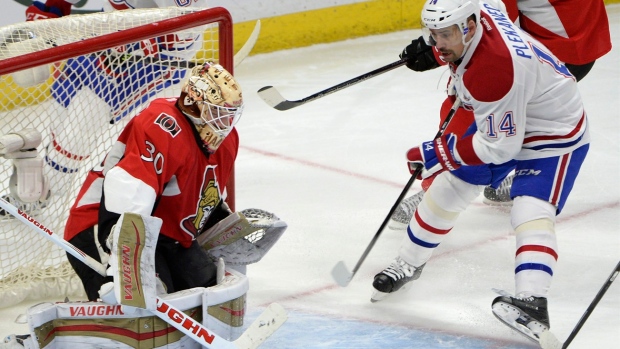 OTTAWA - The Ottawa Senators were the better team from start to finish on Saturday night.

Andrew Hammond stopped all 30 shots he faced to pick up his first shutout of the season and the Senators scored three-shorthanded goals to beat the Montreal Canadiens 5-0.

Jean-Gabriel Pageau, Curtis Lazar, and Alex Chiasson all scored shorthanded for the Senators (34-31-8), who were coming off a 3-1 loss to Buffalo Friday. Marc Methot and Mika Zibanejad rounded out the offence.

It was the fourth time in franchise history that the Senators had three short-handed goals in one game and the first time since April 3, 2008.

"It's fun to score on the (penalty kill)," said Pageau, who recorded his league-leading sixth short-handed goal of the season. "We've worked all year long to try to get better and not allow too many goals. I think we still need to work a little on this, but we're proud for (Saturday)."

It marked the first time in Montreal's storied history that the team gave up three short-handed goals in one game.

Canadiens coach Michel Therrien was at a loss to explain his team's performance.

"There was a lack of execution and concentration. I've never seen anything like it (giving up three short-handed goals)."

Coming off a disappointing performance Friday night, the Senators were determined to move forward.

"I thought it was just a real solid effort by every guy on our team starting with (Hammond)," said Dion Phaneuf. "The bottom line I thought was that we just outworked them."

Ottawa put the game out of reach early in the third when Methot made it 3-0, shooting the puck from a sharp angle. Just over a minute later, Chiasson chased down a loose puck and beat Scrivens through the legs.

Zibanejad rounded out the scoring late in the period, tipping in Mike Hoffman's point shot at 17:52.

"It was a tough night," said Canadiens captain Max Pacioretty. "It's the NHL. You've got to show up and play hard and it didn't happen.

"We just gave them three goals."

Scrivens felt the weight of the loss, but was able to see some positives from his performance.

After getting called for too many men on the ice midway through the second period, the Senators once again displayed their short-handed skills.

Lazar gave Ottawa a 2-0 lead as he beat Scrivens up high on a breakaway for the Senators' second short-handed goal of the game and the team's 14th of season.

Ottawa took a 1-0 lead at the 12-minute mark of the first period. Pageau scored shorthanded on a great pass from Mark Stone.

Notes: C Ryan Dzingel was a healthy scratch as Matt Puempel got back in the lineup for the Senators. Montreal D P.K. Subban missed his fourth straight game due to a neck injury. D Mark Barberio was also out with a concussion.