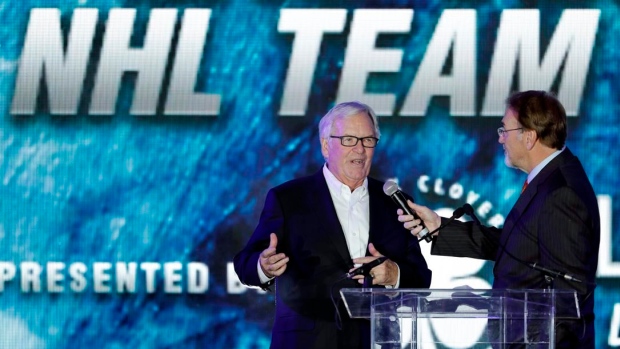 Of all the numbers and concepts that get crunched and tested by those in hockey analytics today, nothing quite intrigues Jack Han like this age-old hockey question: How does a lesser team triumph over a better team?

With the expansion Las Vegas Golden Knights entering the league next season, Han is curious to see what direction they will take both in terms of roster composition and tactics/strategy.

“I think everyone can accept the fact they won't be as talented as the teams they're playing against, certainly not at the beginning,” Han said. “So which direction do they go? Do they play a high-pressure, go-for-it, entertaining game? Or do they get themselves a really good goalie and some veterans and try to clog it up and play a tight game? The difference may be that they lose 4-2 instead of 2-1.

“When you know your players are inferior to the team you're playing, what can you do to win? I find that really interesting. What can be done with tactics and strategy to make a matchup more level?”

Maybe this intrigues Han so much because one of his earliest childhood memories from living in China was having his grandfather relate to him a famous Chinese parable:

“My grandfather taught Chinese literature for about 35 years, and one of the first parables he read to me was called Tian Ji Sai Ma (Tian Ji’s Horse Race),” Han said.

The story: The King and General Tian Ji were race horse owners, but Tian Ji lost most of the races because his horses were just a little slower than the King's horses. The General's military advisor, Sun Bin, noticed the horses were divided into three categories — regular, plus and super. There would be three races in total — regular versus regular, plus versus plus and super versus super — and whoever won two of the three would be declared the winner.

Recognizing the General's horses were slower than the Kings' horses in each of the three categories, Sun Bin advised the General to make an adjustment.

The General followed the advice and won the next set of races.

It sounds like if Sun Bin were an NHL coach, he would favour the hard matchup game.

But it’s a story Han has never forgotten, an illustration of how the inferior side can sometimes come out on top with inventive tactics and strategy.

“I find it fascinating,” Han said. “First, you have to objectively understand the strengths and weaknesses of not only your own team but your opponent, and then you have to devise a plan that maybe gives you a chance to win.”