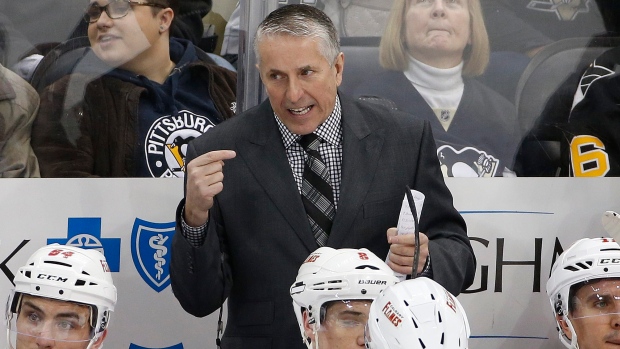 Bob Hartley says he was surprised to hear that there were differences in philosophy within the Calgary Flames.

The club fired Hartley as its head coach on Tuesday after missing the playoffs for the third time in four years under his watch.

Calgary general manager Brad Treliving said that Hartley had brought the team "as far as I feel he can take it."

Speaking on a conference call with reporters 24 hours after his dismissal, Hartley said he never got a sense that management had issues with his coaching style.

The 55-year-old led the Flames to the playoffs for the first time in six seasons in 2014-15, earning the Jack Adams Trophy as coach of the year.

But the club's penchant for comeback wins — Calgary earned a quarter of its points when trailing after two periods — proved unsustainable.

The Flames compiled a 35-40-7 record in 2015-16, 20 points fewer than the previous season that saw the club advance to the second round of the playoffs.

Special teams and sub-par goaltending plagued Calgary for much of Hartley's final campaign, but he said he was proud of how young players like forwards Johnny Gaudreau, Sean Monahan and Sam Bennett had developed, as well as the continued emergence of defencemen Marc Giordano and T.J. Brodie.

"I just feel very sad that I didn't get the opportunity to keep working as a group, to keep working as an organization for better days," said Hartley. "There's no doubt in my mind this team is one or two years away from being an excellent hockey club and making a push real deep in the playoffs.

"It's going to be for somebody else. I fully understand the risk of our business and I accept the responsibilities."

Hartley said he wants to keep coaching — "it's in my blood" — and has no plans to retire from the game.

There are a couple of NHL jobs open, but the Hawkesbury, Ont., native declined to be drawn into any speculation about his immediate future.

"The coaching carousel is spinning out of control," he said. "It's the time of year — there's lots of jobs, there's lots of names. There's going to be lots of speculation, but I will not get involved in this.

"There's a process going on for every job open. I'll be very respectful to that process."