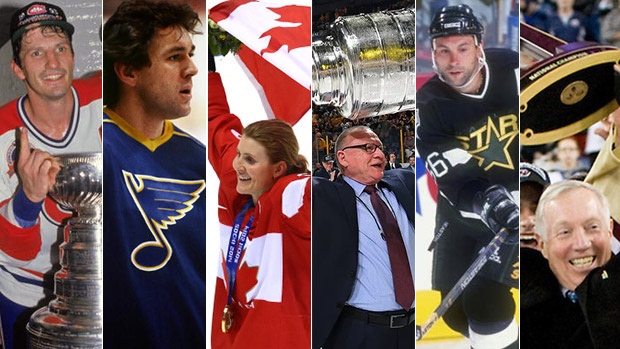 No one outside of the 18-member selection committee knows exactly how long Hayley Wickenheiser’s candidacy was debated, but it couldn’t have been long.

The greatest female hockey player of all-time shouldn't have been debated at all. Wickenheiser's name should have been in the same class as Wayne Gretzky, her waiting period waived for admission to the Hockey Hall of Fame – that’s the level of impact she had on the game.

Nonetheless, after four Olympic gold medals and seven World Championships in 23 years as the face of Canada’s national women’s team, Wickenheiser received the call from hockey’s hallowed Hall on Tuesday afternoon in her first year of eligibility.

Except, she wasn’t available to answer it.

Hall of Fame chairman Lanny McDonald said they attempted to reach her, but Wickenheiser – now a medical school student in Calgary – was sitting for a critical exam and would’ve received a failing grade if she accessed her phone.

It only adds to Wickenheiser’s legend.

No other first-year eligible player aside from Wickenheiser was elected, including Brad Richards, Vincent Lecavalier, Patrick Elias and Dan Boyle. Jeremy Roenick, Alexander Mogilny, Curtis Joseph and others will have to wait at least another year.

The pride of Shaunavon, Sask., Wickenheiser broke countless barriers since bursting onto the scene with Team Canada at the age of 15 in 1994.

Wickenheiser impressed Team Canada GM Bob Clarke so much at the 1998 Nagano Olympics that he invited her to participate in the Philadelphia Flyers’ rookie camps in 1998 and 1999. She later became the first woman to play full-time professional hockey at a position other than goalie when she skated for HC Salamat in Finland in 2002-03.

She represented Canada at the Olympics five times, collecting four gold medals and one silver, and led Team Canada in batting average in softball in the 2000 Summer Olympics in Sydney, Australia. Wickenheiser was twice named the Olympic hockey tournament MVP.

Just stepped out of a med school course to the news. A huge honour and dream come true for a little girl from Shaunavon, Sask.. Congrats to Guy,Sergei,Vaclav,Jim and Jerry. Thank you for all the kind words. #HHOF2019 pic.twitter.com/HioA3rt26R

Wickenheiser, 40, retired tied for the record of most gold medals by any Canadian Olympian with teammates Caroline Ouellette and fellow Hall of Famer Jayna Hefford.

Wickenheiser is currently the assistant director of player development for the Toronto Maple Leafs. No surprise, she is one of the first women in the history of the game to coach NHL players in an on-ice capacity – and it only figures that one of the most driven players will likely soon walk away from that post to pursue a career as a doctor.

This year’s three other player inductees had to wait a tad longer than Wickenheiser. With no other first-ballot players breaking through, this was a year to make up for previous omissions.

Carbonneau, 59, had been passed over 15 consecutive years since his first year of eligibility in 2004. Part of that may have been that he didn’t rack up eye-popping statistical numbers during his 18-year NHL career.

He finished with 260 goals and 663 points in 1,318 regular season games – well below traditional Hall of Fame thresholds. But numbers don’t come close to telling the whole story of one of the best defensive forwards ever to play the game.

“He is certainly deserving,” Hall of Famer Bob Gainey said. “I’m very happy he is being recognized after seeing so much of his success first-hand. The criteria used for the Hall of Fame does not always cover the intangible, but a lot of hockey is intangible.”

Gainey won four Selke Trophies as the league’s top defensive forward, while his protégé and former linemate Carbonneau won three. He was also twice the runner-up and nine times a top-five finisher – both of which exceed Gainey’s totals.

Carbonneau’s teams made the playoffs 17 out of 18 seasons. When it came time for Gainey, then as GM of the Dallas Stars, to add players to chase a Stanley Cup, he said it was “simple” to decide to trade for​ Carbonneau. He had the mindset of a winner.

“He excelled in areas not as sharply covered or recognized,” Gainey said. “We worked well as teammates and linemates and I was really in-tune with the things he did to keep a group directed the right way. He would say, ‘This is how you do it boys.”

Carbonneau won three Stanley Cups, captaining the Canadiens to Canada’s last Cup in 1993. Gainey finished with five Cups, but played largely on more talented teams, and some came to refer to ‘Carbo’ as a “lower-case Gainey.”

“That would be doing a disservice to Guy Carbonneau,” Gainey shot back.

Nedomansky, 72, was first eligible for the Hall in 1987 after his NHL career wrapped with the St. Louis Blues. He will be remembered more for his international achievements.

Nedomansky became the first player to defect from Eastern Europe when he left Soviet-ruled Czechoslovakia to join the WHA’s Toronto Toros in 1974. It took 15 or more years for players to begin defecting from the Soviet Union with more regularity.

Before that, Nedomansky was considered a hero in his homeland, helping lead the Czechs to two straight World Championship wins over the Soviet Union in 1969 during a time of political unrest in the country. He won silver and bronze medals at the Olympics representing Czechoslovakia.

Nedomansky later led the Detroit Red Wings in 1978-79, became a Canadian citizen and has been a pro scout with the Vegas Golden Knights since 2016.

"When I made that decision in 1974 to follow my dream, I jumped right in," Nedomansky said. "I’m so happy I did that."

Zubov, 48, was frequently in the Hall of Fame conversation over the past five years since first becoming eligible in 2014. The longtime Dallas Stars stalwart was one of the premier offensively-gifted defencemen of his generation. He posted seven seasons of 50 assists or more.

Zubov finished his 16-year NHL career with 771 points (152 goals) in 1,068 games. He posted an impressive 117 points in 164 Stanley Cup playoff games, leading the Rangers (1994) and Stars (1999) as a critical cog in their Cup runs. Zubov said his wife occasionally mentioned the Hockey Hall of Fame as a possibility over the years, but he largely brushed it off, saying he chose instead to dive into coaching.

"I was eight years old when I travelled to Canada with the national team. We had a tournament in Canada and I walked into the Hall of Fame," Zubov said. "Back then, I couldn't even think of – or dream – that one day I would have a chance to be part of it."

Rutherford, 70, began his post-playing career as a youth goaltending coach in the Detroit Compuware program, led by then-owner Peter Karmanos. It was Karmanos who hired Rutherford to be the GM of the OHL's Windsor Compuware Spitfires in 1984, and then brought him along to Hartford and Carolina. He is just the second Hall of Fame GM to win Stanley Cups with two different franchises in his 25-year NHL run, including two in the last four years with the Penguins.

“This is something you don't think a lot about, but you sometimes pause to dream about,” Rutherford said. “I’ve travelled lots of miles in hockey and met so many great people along the way. I started my career in Beeton, 50 miles north of the Hall of Fame, never dreaming that I would once be in it.”

York, 70, has been an NCAA Division I head coach consecutively since 1972, with stops at Clarkson, Bowling Green and now Boston College. At each stop, he pushed countless alumni on to the NHL, from Clarkson (Dave Taylor), to Bowling Green (Rob Blake and George McPhee) to Boston College (Johnny Gaudreau, Brian Gionta, Brooks Orpik). His list of alumni is long and distinguished.

"I almost didn't answer the call," York said. "I thought John Davidson was trying to trade for one of my players. When he told me I was going to be inducted, I had to sit down."

Hayley Wickenheiser was unable to be reached to be notified for her Call to the Hall. First inductee in a number of years. Lanny McDonald said Wickenheiser, a medical school student, is currently sitting for an exam today and would receive a failing grade if she used her phone.