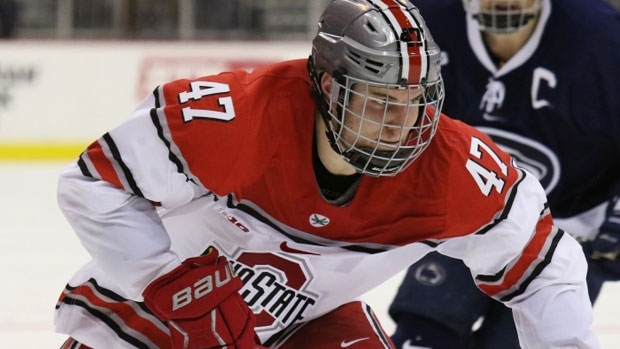 In what's been described as a relatively thin year for U.S. college free agents, (The) Ohio State University defenceman Josh Healey is making something of a name for himself.

He’s a throwback blueliner, a big open-ice hitter of some renown.

"Old school – keep your head up when he's on the ice," one NHL executive said of the 22-year-old from Edmonton who has generated interest from almost every NHL club.

Today, the Big Ten suspended Healey for two games for a hit midway through Saturday night's game against the University of Minnesota. Healey was assessed a five-minute major and game misconduct for contact to the head.

Healey likely got the two-game suspension because he was previously suspended for one game for a hitting major against Wisconsin on Jan. 28. He also had a five-minute major for a hit in a game on Jan. 7, but that didn't result in a suspension.

"Hits too hard for college hockey," another NHL scout said. "His game will be better suited to pro."

Healey is listed at 6-feet and 196 pounds. Scouts say he's a decent first-pass defenceman but his forte is open-ice hitting and playing a hard, physical game. He projects as a depth or perhaps third-pairing type defenceman. He’s not a sure bet to play in the NHL, but certainly worth a shot.

"It's not a great year [for college free agents]," an NHL executive said. "[Healey] will get a contract. There's lots of interest in him."

Meanwhile, another free-agent defenceman attracting NHL interest is 25-year-old Czech Jakub Jerabek, who plays for Chekhov Vityaz in the KHL. Jerabek is free to come to the NHL once his KHL season is over.

The sub 6-footer (5-foot-10, 182 pounds) is a good skating and skilled offensive-minded blueliner. Multiple NHL teams have expressed interest in signing him.

Because he's 25, Jerabek can be signed to an entry-level contract, but only for one year.