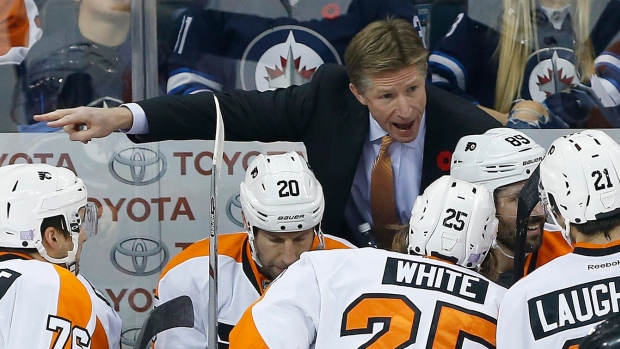 The Philadelphia Flyers picked up a much-needed 5-2 victory over the Calgary Flames on Monday to snap their losing at 10 games.

However, general manager Ron Hextall took some pressure off the club before Monday's game, announcing the team would not fire head coach Dave Hakstol.

“Dave Hakstol is our coach and he will remain our coach. Period,” Hextall told Sam Carchidi of the Philadelphia Inquirer. “I’ve said it over and over, and I’m not going to say it again.”

Hexy: Hak will coach the rest of season. And beyond.

Hakstol is in his third season as head coach of the Flyers. He directed the team to a 41-27-14 record in his first season, but saw the team fall out of the playoffs with a 39-33-10 record last season.

Hextall defended Hakstol's 8-11-7 record to start to this season, and added he does not believe the team has quit on their head coach.

“I think he’s done a good job,” Hextall continued. “….We’re in a rut. They happen throughout a year. You can’t value and judge your team on 10 games or 15 games or 20 games. It’s a long season and you’re going to have your ups and downs.”

At 1-4-5 in their last 10 games, the Flyers have dropped to last in the Metropolitan Division. The Flyers will visit the Edmonton Oilers on Wednesday night.