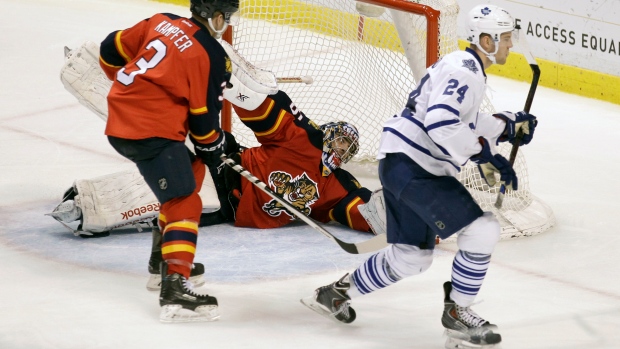 Holland netted the winning goal 5:28 into the third period against Al Montoya, who had replaced injured starter Roberto Luongo after the first period. It was the Maple Leafs' first road win in 17 games (0-14-2) since they beat Boston on Dec. 31

The Panthers changed goalies twice, and even had goalie coach Robb Tallas get dressed on an emergency basis, but the 41-year-old Tallas never entered the game. He hasn't played in an NHL game since 2001.

Montoya was injured early in the third period, but managed to stay in the game despite being hobbled. He eventually was replaced by Luongo, who got back into uniform after changing into street clothes.

Luongo was injured with 4:03 left in the first period when he was hit with the puck on the side of the head on a wrist shot by Leo Komarov. Luongo was treated by trainers for several minutes, but remained in for the rest of the period.

Luongo came back on with 9:08 left in the game. Montoya finished with 13 saves. Luongo stopped 19 shots.

Nazem Kadri and Tyler Bozak also scored for the Maple Leafs, and Jonathan Bernier made 40 saves.

Holland put the Maple Leafs ahead for good when he corralled a rebound in front of the net and poked the puck past Montoya.

The Maple Leafs had tied it 2-2 on Kadri's goal 22 seconds into the third. The puck rebounded sharply off the boards, and Kadri got behind Montoya to sweep in the puck.

Montoya collided with Kadri and was slow getting up.

Ekblad put the Panthers ahead 2-1 with a power-play goal. Ekblad took a pass in the high slot and one-timed a shot past Bernier on the glove side at 13:12 of the second.

The Maple Leafs have allowed a power-play goal in seven of their past eight games.

Bozak tied it 1-1 with a power-play goal in the second period. Phil Kessel took a shot that was blocked, and Dion Phaneuf and Bozak scrambled for the loose puck in front.

Bozak poked it in at 4:40 for Toronto's first goal since Feb. 26 against Philadelphia when Phaneuf scored at 1:22 of the third period. The Maple Leafs went scoreless for 163 minutes, 18 seconds.

The Panthers took a 1-0 lead on Pirri's goal. Jimmy Hayes passed the puck to Pirri in the slot for a wrist shot that went between Bernier's pads with 17.2 seconds left in the first.

It was Pirri's third goal in three games since he missed nine due to an upper-body injury.

NOTES: Forward Joakim Lindstrom, acquired Monday from St. Louis, made his Maple Leafs debut. ... Ekblad set the Panthers record for goals by a rookie defenceman with 11. He broke Ed Jovanovski's mark that was established in the 1995-96 season.