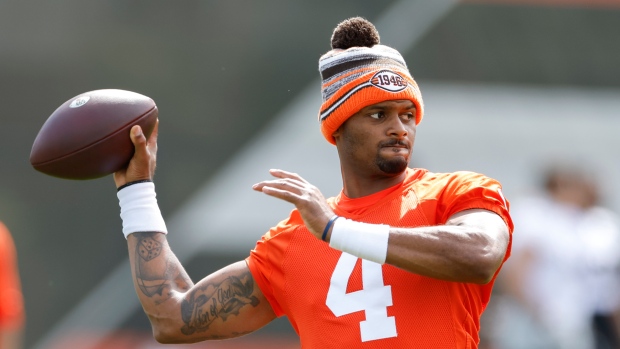 The lawyer who represents 24 women who have filed civil lawsuits against Deshaun Watson alleging sexual misconduct said Monday that the first of "many cases" against the Houston Texans related to their former quarterback's alleged conduct has been filed.

Tony Buzbee files the first of “many cases” against #Texans in connection with #Browns Deshaun Watson: pic.twitter.com/RlJ1a71qxx

"Today we filed the first case of what will likely be many against the Houston Texans related to Deshaun Watson's behaviour," Buzbee said in a statement. "Suffice it to say, the overwhelming evidence collected indicating that the Houston Texans enabled Watson's behaviour is incredibly damning. We believe the Texans knew or most certainly should have known of Watson's conduct. Beyond that, we believe the filing speaks for itself."

Allegations against Watson stem from his conduct during massage appointments. Watson has continually denied any wrongdoing. No criminal charges have been filed against the 26-year-old Gainsville, GA native and none of the claims has been proven in court.

Earlier this month, The New York Times' Jenny Vrentas spoke to one of Watson's accusers who says she met Watson at The Houstonian, a Houston-area hotel and club, where the Texans had obtained a membership for him. She said that Watson had a team-issued non-disclosure agreement for her to sign. In a deposition, Watson said that the NDAs came from Brent Naccara, the team's director of security. He said a copy of the NDA appeared in his locker once Nia Smith, one of the women who later sued Watson, made allegations against him public on Instagram in November of 2020.

Vrentas noted that it was unclear if the Texans knew just how many massages Watson received or who was providing them, but Watson acknowledged in a deposition that his place in The Houstonian was secured by the team. Interviews and records indicate that at least seven women met Watson there.

Twenty of the 24 civil lawsuits against Watson were settled out of court last week. The remaining four suits could still go to trial, but that would not occur until 2023.

Watson, 26, was traded to the Cleveland Browns in March and immediately signed a five-year, $230 million deal with all of the money being guaranteed in the largest contract in NFL history.

He is set to meet with an NFL discipline officer on Tuesday with the league expected to seek a significant suspension for Watson.