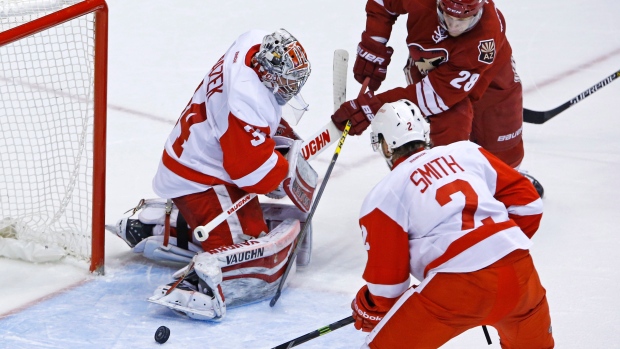 UNIONDALE, N.Y. - After getting pulled in the Detroit Red Wings' loss to the New York Islanders Sunday, goaltender Petr Mrazek wasn't about to rest on his laurels about shutting out the Tampa Bay Lightning the day before.

"Yesterday was yesterday and I today I let (in) four goals," Mrazek said.

Jimmy Howard let in one goal in relief, but as coach Mike Babcock said, the all-star didn't have to face many chances. One game wasn't enough to judge Mrazek and Howard in what's becoming an intriguing goaltending competition for the Red Wings.

"Obviously (Mrazek) shut out one of the best offensive teams in the league the other night, and tonight the puck went in on him," Babcock said Sunday at Nassau Coliseum. "We'll get on a flight and we'll have an off-day tomorrow and by the next day I'll have a plan."

The plan could be to split action between Mrazek and Howard for the rest of the regular season before Babcock picks a starter for Game 1 of Detroit's first-round playoff series. Given Mrazek's brilliance mixed with inconsistency and Howard's recent struggles, it's not an easy decision.

Howard may have the edge based on his established NHL track record and previous playoff appearances.

"You've just got to take care of your own business by working hard every single day in practice and just battling," Howard said. "Once you get out there, just play. I know how to play this game."

Mrazek on Saturday became the first goaltender this season to shut out the deep, high-powered Lightning. When Howard was injured in January, the 23-year-old Czech took the reins as Detroit's starter.

"You try and play every night," Mrazek said. "Sometimes it's going to go in a good way, sometimes in a bad way. Just stay positive and be ready for the next game."

The Red Wings' next game is Tuesday against the Ottawa Senators, whose coach, Dave Cameron, declined to name a starter when asked Monday. Ottawa's playoff hopes are far more precarious than Detroit's, so it's not necessarily whom Babcock picks to start the next game that matters as much as who's the No. 1 going into the post-season.

Counting Sunday's hard-luck loss he was saddled with for giving up one goal on a breakaway, Howard is 21-13-10 with a 2.43 GAA and .911 save percentage. He has won just one of his past six decisions.

"I felt better," Howard said after stopping 15 of 16 shots Sunday. "I've really focused in on just focusing on the puck, nothing else. It didn't matter if there was guys in front of me — it's just finding it. I think that's why I've had success in the past and what I need to do here now in the future."

Detroit is seventh in the NHL in goals a game at 2.89 and is middle of the pack in goals against. Lately, the Red Wings have found more offence, and Babcock said he'd like his team to solve some defensive miscues.

Goaltending is part of that process.

"It's just a matter of just going out there and doing it night in, night out for the guys because we're definitely scoring enough goals here," Howard said. "So Petr and I got to find a way."