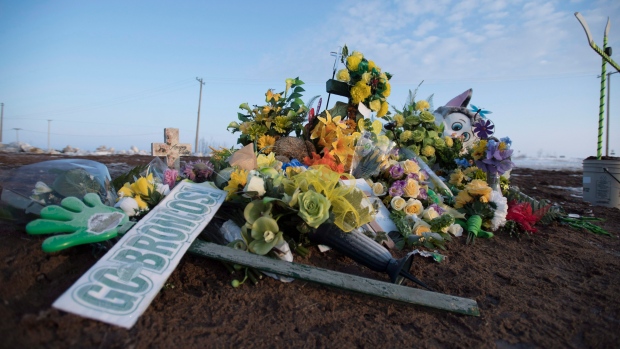 HUMBOLDT, Sask. — A trademark dispute over #HumboldtStrong and other slogans related to the fatal Humboldt Broncos bus crash in April is being resolved.

The team took on the Saskatchewan Junior Hockey League after it applied to trademark phrases that also included "Healing is in the Game" and "Sticks on the Porch."

Team president Kevin Garinger said the league's board of governors met this week and unanimously agreed that those trademarks should belong to the team and the community.

"We are just working through the final stages of that process to ensure that it falls in the rightful hands of the Humboldt Broncos and our whole Humboldt community," he said Thursday.

The Humboldt Strong hashtag showed up on social media soon after the April 6 crash, which killed 16 people and injured 13 others when the team's bus and a semi-truck collided at a rural Saskatchewan intersection.

People rallied around the team by raising money, putting hockey sticks on porches and wearing jerseys.

The board of governors for the league said it was an easy decision for the trademark and other slogans to be held by the team.

"The only reason we had initially trademarked it was so no one else would," said chairman Rick Shultz, who added they failed to properly communicate their intentions to the team because they were still dealing with the aftermath of the crash.

Shultz said they are in the process of making sure the applications are transferred to the Humboldt Broncos.

Garinger said the phrases have become extremely important to the team and its community.

"Humboldt Strong is something that relates directly to what we want to do to ensure that we can honour the legacy of our Humboldt Broncos family — and those who have lost their lives and those who continue to have their lives changed because of this tragedy," he said.

The team has created the HumboldtStrong Community Foundation, which continues to raise money for the players, employees, families and volunteers, as well as first responders and any others who were affected by the crash.

— By Colette Derworiz in Edmonton.