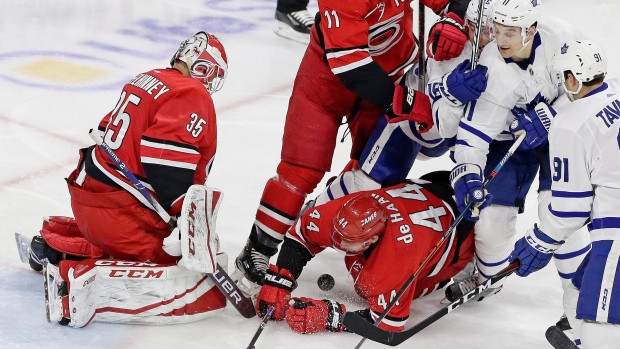 RALEIGH, N.C. — Coming into the night, the Toronto Maple Leafs were tied for the NHL lead in scoring and ranked second in goal differential on the strength of a top-notch power play.

Still, the Carolina Hurricanes found a way to neutralize the Leafs behind a former Toronto goaltender and solid special-teams play.

Trevor van Riemsdyk and Justin Williams scored 22 seconds apart in the first period, sending the Hurricanes to a 5-2 victory Wednesday.

Curtis McElhinney, claimed off waivers from Toronto in early October, made 30 saves as Carolina snapped the Maple Leafs' four-game winning streak. Jordan Staal had two assists for the Hurricanes, who killed three penalties.

"The defencemen and the forwards did a phenomenal job, and we got a couple of key blocks in there, which were huge," McElhinney said.

Micheal Ferland scored his 11th of the season with 12:15 remaining, a power-play goal that put the Hurricanes ahead 3-1. Teuvo Teravainen assisted on the play.

Kasperi Kapanen answered for Toronto with 8:05 left, racing in to score his ninth of the season and cut the margin to 3-2. Sebastian Aho and Andrei Svechnikov added empty-net goals for Carolina.

"It feels good. I'm not going to lie, it was a tough way to leave Toronto, but I certainly understand what the circumstances were," McElhinney said. "But it's a huge win for us, especially considering where they are in the standings."

"We weren't prepared to go, for whatever reason," Maple Leafs coach Mike Babcock said. "The message is pretty clear: You don't work, you don't win."

Carolina went ahead when van Riemsdyk scored his first of the season. He took a backhand swipe at the puck after a scramble in front, beating a prone Andersen at 10:56. Toronto challenged the play for goaltender interference, but the call was upheld.

Staal then won a faceoff to the left of Andersen. Calvin de Haan skated in and found Williams alone in front of the net.

John Tavares scored his 14th of the season unassisted for Toronto later in the period to cut the lead to 2-1.

Carolina outshot Toronto 29-11 in the first, a record for shots in a period by the team since it relocated from Hartford in 1997. But the Hurricanes needed more than 18 minutes to register a shot on goal in the second.

Carolina killed off two penalties, keeping the lead despite being outshot 12-2. The final shot total was 45-32 in favour of the Hurricanes.

Carolina coach Rod Brind'Amour said his team hasn't made changes to its penalty kill, but he acknowledged it has improved.

"The first few games we had some (tough) bounces, but that happens on the penalty kill," he said. "Really nothing has changed, and the guys have gotten more comfortable with things. Honestly, I just think the bounces have been going our way."

NOTES: Announced attendance was 12,562. ... Tavares' goal was his 11th of the season on the road. ... Williams' goal for Carolina was his 100th with the team. He became the ninth player in NHL history to score at least 100 goals and win the Stanley Cup with two franchises. Williams scored 103 goals for the Los Angeles Kings and was part of championship teams in 2012 and 2014. He also played on Carolina's 2006 Stanley Cup-winning squad. ... Toronto entered as the least-penalized team in the NHL, and Carolina ranked second. ... Carolina activated forward Victor Rask, who missed the first 21 games with a hand injury, and sent Clark Bishop to the AHL. ... It was the first of three meetings between the teams this season. The Maple Leafs return to Raleigh on Dec. 11, and the Hurricanes visit Toronto on April 2.

Maple Leafs: At Columbus on Friday.